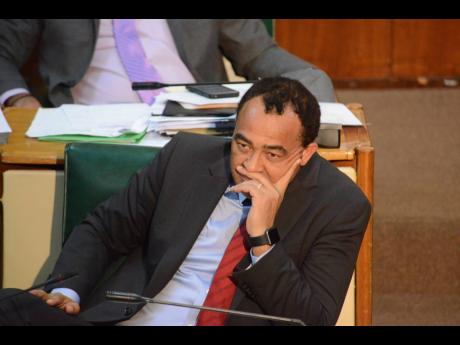 Health Minister Dr Christopher Tufton has raised concerns about the fall-off in recent years in the number of Jamaicans vaccinated against measles even as he sought to assure the country that no imported case of the disease has been recorded.

In a statement in the House of Representatives yesterday, Tufton said that no local or imported cases of measles have been recorded locally, but acknowledged that “over the last few years”, the uptake of the measles vaccines has been on the decline, dropping to 89 per cent coverage of MMR1 and 82 per cent coverage of MMR2 last year.

“In order to stop the disease from spreading, 95 per cent of children in Jamaica need to be fully vaccinated with the two doses – MMR1 at 12 months and MMR2 at 18 months,” the health minister said.

He appealed to parents to visit the nearest health centre to ensure that their children are fully immunised, warning that “measles kills more children than any other vaccine-preventable disease”.

Last week, the World Health Organization (WHO) published a report detailing measles outbreaks around the world. It said cases had increased by 300 per cent globally in the first three months of 2019 compared to the similar period of time last year. Although the United States has recorded a significant number of cases, especially in New York, it is not alone. Measles outbreaks are currently happening in Madagascar, Sudan, Thailand, Philippines, Ukraine, Myanmar, Ethiopia and other countries.

WHO officials have reported a spike in measles cases in countries that have high vaccination numbers, including the US, Tunisia, and Israel.

Opposition Spokesman on Health, Dr Dayton Campbell, challenged Tufton during yesterday’s sitting, saying he was aware of one imported case of measles in Jamaica.

“How it is that I could be made aware of these cases but the ministry is unaware?” a strident Campbell questioned after Tufton initially indicated that he was unaware of the case.

“This is not the first time. It ought not to happen where you have an illness in the country [and] the [opposition] spokesperson is made aware, other physicians are made aware, but the line minister – the person in charge who has staff and resources at his disposal – is reporting that he is unaware,” he added.

But after consulting with Chief Medical Officer (CMO) Jacquiline Bisasor-McKenzie by cell phone, Tufton said the matter to which Campbell was referring was not an imported case of measles.

He said the CMO informed him that the case involved a child, who was presented at Hospiten, a private hospital in Montego Bay, where Campbell works, with complications associated with measles.

Tufton told Parliament that the child had the virus two weeks before arriving in Jamaica and explained that it was no longer contagious at the time the child was hospitalised in Jamaica.

“If it is not contagious, it does not represent a threat to the population,” the health minister insisted.

He gave the assurance that the health ministry is monitoring the island for imported cases of the illness and is recirculating communication to sensitise doctors and other health professionals about the increased risk of measles.

The last case of indigenous measles in Jamaica and the wider Caribbean occurred in 1991, the ministry said.