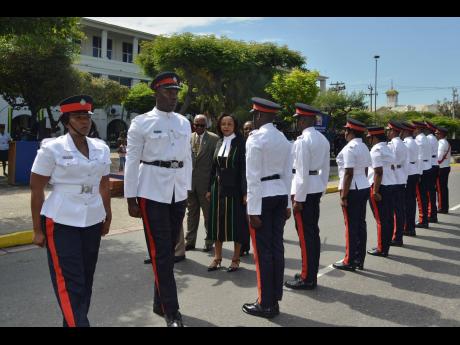 Kenyon Hemans/Photographer
Justice Lorna Shelly-Williams inspects the guard of honour on King Street in downtown Kingston during the dress parade at the opening ceremony for the new Easter term of the Home Circuit Court yesterday. 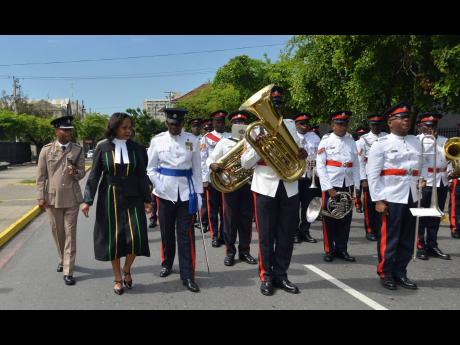 Kenyon Hemans/Photographer
Justice Lorna Shelly-Williams (second left) inspects the guard of honour on King Street in downtown Kingston during the drress parade at the opening ceremony for the new Easter term of the Home Circuit Court yesterday.
1
2

With the nation’s courts still hobbled by severe backlog, 1,024 cases have been traversed into the new Easter Term of the downtown Kingston-based Home Circuit Court as only 91 cases were disposed of in the previous term, much to the dismay of members of the Bar.

Delivering remarks yesterday at the opening of the new court term, Senior Deputy Director of Public Prosecutions Jeremy Taylor lamented that disposing of all the cases set for the new term is an unlikely feat.

“So this term, we have 1,049 matters to deal with between today and July 31, when the term ends. Not even Hercules and his 12 labours, I think, can manage to deal with all the 1,049 matters in the period of time which we have been given. And maybe it is a time to rethink as to the way how we organise the whole Circuit system,” the senior prosecutor said, citing that there are 25 new committals for the new term.

He added, however, that the Office of the Director of Public Prosecutions would employ special practices and procedures to reduce trial time.

“I think every Jamaican would have concerns about the burdens, firstly on our judiciary and what it is they are expected to perform – peculiar and mystical in many ways – in order to achieve the level of efficiency which has been publicly stated to be the goal and aim of our judicial system. I think we are currently in a time a transition [and] hopefully transformation that we will come out better on the other end,” Leiba said.

Justice Lorna Shelly-Williams is encouraging prosecutors and defence attorneys to utilise trial by judge alone as this will help to significantly reduce trial time.

Of the total number of cases set for the Easter Term, the majority of them are for murder (545) and rape (203).