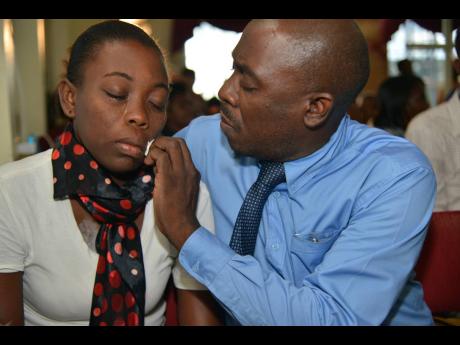 The three men who were taken into custody by investigators probing the gruesome murder of eight-year-old Shantae Skyers in the Sterling Castle area of Red Hills are not being treated as suspects at this time, says Deputy Superintendent Gary Griffiths.

Addressing a gathering of major stakeholders and residents at a Jamaica Constabulary Force-organised community meeting at the Sterling Castle New Testament Church of God yesterday, Griffiths explained that labelling the men as suspects before investigators have completed their probe is counterproductive and could harm further investigations.

He was referencing the killing of Miguel Williams, a 26-year-old resident who was attacked, beaten, and then set alight by an angry mob who accused him of having knowledge of what led to Skyers’ demise.

“ ... We are doing a number of pathological examinations, looking at DNA, for example. So if this person is found to be innocent, absolved by the DNA, then someone would have been killed for something that they didn’t do. We need to look at that also,” noted Griffiths.

He told residents that a number of statements had been collected, including from the men in custody.

At yesterday’s meeting, residents lamented the poor infrastructure in the area, saying that a lack of proper street lighting and the poor road conditions are posing challenges in keeping children safe.

Elecia Bethune, a representative of the Sterling Castle Heights Citizens’ Association, told The Gleaner that her association had already begun taking steps to safeguard the vulnerable in the community.

“We have installed CCTV cameras on at least one house to keep watch over the entrance of the community. More is needed, but at least we are doing something,” she said.

“It’s really about getting to that place of personal responsibility, where we once again become a community of people who care about the other person. But because this is really a community of two sides – one structured, the other informal – what you have is a situation where unknown persons simply take up residence in the informal part, and that’s a security risk,” Bethune said.

“I have travelled through Blue Hole a million times before. They have said they have walked the streets by themselves, but times have changed … . The people that we used to live with that used to look out for each other, they are dying out,” she said.

Another resident called on the Jamaica Public Service to install more street lights in the community. The Blue Hole area, where young Skyers was found dead, has only one street light.