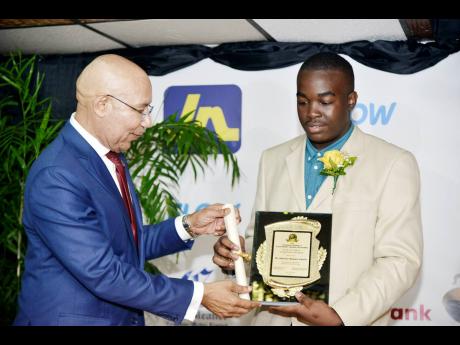 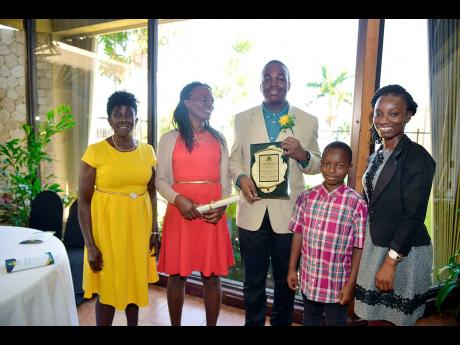 When 18-year-old Shavane Romaro Clarke stepped up to collect his Governor General’s Achievement Award at yesterday’s ceremony, it was a family celebration of sorts.

His mother, Andrea Minott, sister Vinesea Harvey, maternal grandmother Florence Drysdale, and nine-year-old nephew Khadjel Dallas had all travelled from Spring Hill – which is “up the Buff Valley” in Portland – to share in the joyous occasion.

His mom and grandomother told The Gleaner they were “happy” and “feeling good” as they reflected on Clarke’s accomplishments.

The teenager, who maintained a serious expression for most of the day, had brought them tremendous joy and pride.

Harvey explained that her younger brother had always demonstrated a high level of commitment to his studies, and so this latest accolade was not at all surprising.

“We are happy about this because from a young age, he has exemplified excellence in school,” she told The Gleaner.

The deputy head boy at St Mary High School, where he is a sixth-former and a member of the Schools’ Challenge team, was quite calm when around him, people were busy snapping photos and otherwise celebrating with friends and relatives.

In fact, Clarke seemed unfazed by all the excitement. That was until The Gleaner asked what had led to him attend high school in St Mary instead of the parish in which he resides. A wry smile paved the way for a passionate outflow of the stories shared by his older sister, Peta-Gay Harvey, about her time at the school when Errol Johnson, current custos of St Mary, was principal.

“In the evening, she would talk about her experiences – the school surroundings and what it was like under the leadership of Errol Johnson, and because of that, I wanted to go to St Mary High School instead of Titchfield High School, following in my sister’s footsteps,” he disclosed.

In so doing, he has made parents Andrea Minott and Dorian Clarke very proud.

Speaking on his latest accolade, the teenager, who will begin tertiary studies in September, was quite matter of fact.

“It goes to show that I am doing something right, and this is just empowerment to continue on the same path and improving what I’ve been doing over the years to help individuals, continue with academic prowess, and just assist in national building. Because every mickle mek a muckle, and I may be an individual from a small community but little by little, I am assisting with nation building of Jamaica,” he explained

Clarke was one of nine recipients of the 2019 Governor General’s Achievement Awards for the county of Surrey recognised during yesterday’s ceremony at the Jamaica Conference Centre in downtown Kingston.

The ceremony for the county of Cornwall will take place in Hanover on May 3, with the Middlesex event slated for June 25.