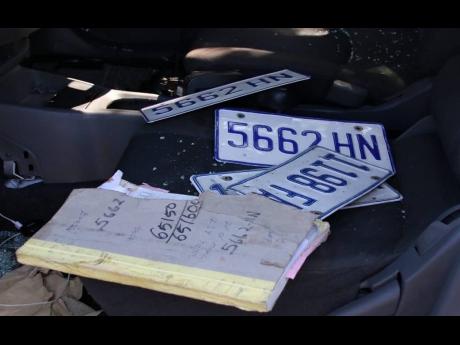 Contributed
Two sets of licence plates and a book on the seats of the Nissan AD Wagon in which the three cops were travelling when they were intercepted by an off-duty policeman.

At least three top-level probes have been launched into a dramatic early morning murder in St Catherine yesterday that culminated in a high-speed car chase and a deadly shoot-out involving an off-duty cop and the alleged attackers, who turned out to be his colleagues.

The rogue cops were on suspension from the Jamaica Constabulary Force’s Mobile Reserve outfit to which they are assigned.

One of them was killed in the shoot-out, another arrested, while the third escaped, police sources have reported.

A motorist was also killed in the crossfire.

The cop who escaped, Corporal Kirk Fraser, and the one arrested, are on bail in connection with a 2015 murder for which they were charged in 2017.

The Independent Commission of Investigations (INDECOM) is investigating whether the three suspended policemen were contract killers who used police resources and intelligence to facilitate their criminal undertakings.

“That’s one of the theories we’re looking into right now. As you can imagine, there is a lot to look at, but based on what we have seen and the knowledge we have of these guys, we are certainly looking at that,” a senior INDECOM investigator told The Gleaner yesterday from the Spanish Town crime scene.

In a statement yesterday, the Constabulary Communications Network said that the Inspectorate of Constabulary and the Criminal Investigation Bureau are leading separate probes.

At the crime scene, investigators removed five guns – three Glocks, a .45, and a Browning 9mm – from the grey Nissan AD Wagon in which the cops were travelling.

They also found a log book, five licence plates, and blue flashing lights used by the police during emergency responses.

It is reported that shortly after midnight, the rogue cops attacked and shot to death St Catherine resident Sheldon ‘Junior Biggs’ Daley during a party at Chedwin Park on the outskirts of Spanish Town.

They then attempted to flee in the Nissan wagon.

A brave off-duty cop who witnessed the incident pursued them in a high-speed chase that ended in a shoot-out when the attackers’ vehicle crashed into another car at the intersection of Brunswick Avenue and Jobs Lane, near the Old Capital.

It is in that shoot-out that one of the rogue cops was killed as well as an unidentified male into whose car the alleged killer cops had crashed.

Hours after the shooting, frightened residents stood outside the perimeter of the cordon created by the police.

They called the slain Daley a “good, pleasant” person.

“A good somebody the bwoy dem kill a the dance. Decent family him come from. Me a tell you. Mother and father big in church, so you know a good youth,” said a bystander, who went by the moniker ‘Lenky’.

The incident has sent shockwaves throughout the JCF.

In screenshots of verified WhatsApp conversations, police personnel expressed outrage, saying that the incident has brought “shame and disgrace’”on the force.

In February, four cops were arrested by the Major Organised Crime and Anti-Corruption Agency in connection with the robbery of an elderly couple in Hellshire, Portmore, St Catherine.

A number of other incidents involving policemen perpetrating serious crimes have also surfaced.