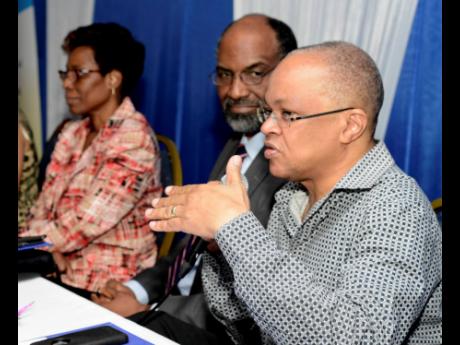 Noted gynaecologist Dr Michael Abrahams has asserted that many parents are shying away from ensuring that their young daughters are vaccinated against the Human Papillomavirus (HPV) because they are in denial that their off-spring may be sexually active.

Last year, the Government introduced a programme to provide the HPV vaccination to schoolgirls, but close to 60 per cent of the 20,647 pupils who were targeted in the Christmas term did not receive the vaccine, and between February and April this year, only around 400 were inoculated.

Educators say there was inadequate information about the programme although the health ministry says that it ran advertisements and sent out letters to parents through schools.

But according to Abrahams, there is the greater issue of an unwillingness to accept that underage girls are having sex, through which the virus may be transmitted.

“Even if some girls are not having sex by choice, they are coerced into it. Some of them are being abused even by members of their household, so they are exposed. That is a concern,” Abrahams said.

He was speaking with The Gleaner yesterday at the Dr Joseph St Elmo Hall Memorial Lecture Series on Cervical Cancer put on by the Jamaica Cancer Society at The Jamaica Pegasus hotel.

HPV is transmitted through sexual as well as intimate skin-to-skin contact.

The gynaecologist said that when the third cohort of HPV vaccines in schools is rolled out, it must be coupled with wide-scale public education.

“They have to couple it with public education or else it is not going to work. People need to understand what they are signing up for,” Abrahams stressed, citing what he called a proliferation of misinformation, especially on the Internet.

Some parents have also rejected vaccines for their children because of religious reasons.

“The science behind how vaccines work is very sound. People will tell you, for example, that vaccines cause autism, but the evidence to support that is scant. Some think you are injecting germs into people and killing them. You don’t inject healthy and living viruses and bacteria into people,” he said.

Melody Ennis, acting director for the Family Health Unit in the Ministry of Health, is encouraging parents to get their young daughters vaccinated against HPV without delay.

“We have about a 39 per cent uptake, and we need an 80 per cent uptake. These girls, 11-13 years old, stand the risk of developing cancer when they are 35-40 years old. We need to dispel as many myths as we can,” Ennis said.