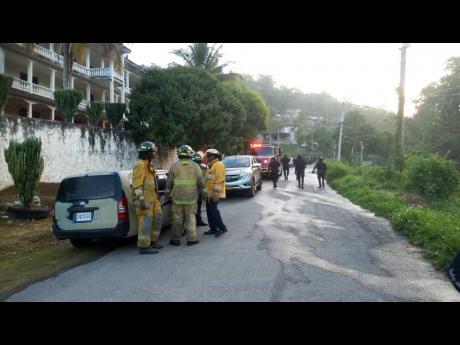 Photo by Hopeton Bucknor
Members of the fire brigade and the police force outside the gate of the house in Comfort, St James, where a man was shot after stabbing his eight-year-old son early Tuesday morning. 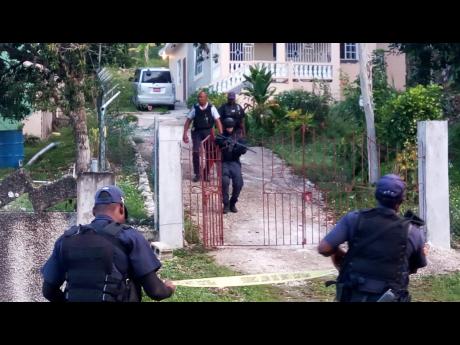 Contributed
Police officers outside the gate of the house in Comfort, St James, where a man was shot after stabbing his eight-year-old son early Tuesday morning.
1
2

A St James taxi operator, who first held his eight-year-old son hostage and then tried to kill him, was shot dead by the police following a bizarre six-hour stand-off in Comfort district, near Anchovy in St James, yesterday.

The incident, coupled with two murders in Montego Bay, ushered in a bloody curtain-raiser to Prime Minister Andrew Holness’ declaration of a state of public emergency across three western parishes.

According to reports, the taxi operator became enraged when cops visited his house about 12:30 a.m. to investigate reports that he was involved in a sexual affair with his 13-year-old daughter who was residing with him.

On the arrival of the police, the 49-year-old man – whose name The Gleaner is withholding to protect the children’s identities – became boisterous, verbally abusing family members, who he accused of telling lies, while demanding that the police leave his home.

With the police approaching, he allegedly picked up his eight-year-old son and locked the doors to the house, threatening to kill himself and the child if the police did not leave.

“The officers tried to talk him out of carrying out his threats, but instead, he went inside the kitchen and turned on two cooking gas cylinders and picked up a cigarette lighter and began threatening to set the premises on fire,” a family member told The Gleaner.

A unit from the St James Fire Department was called to the location and cut open the grille to the house. Upon seeing the firemen, he reached for the cigarette lighter, but the quick-thinking firemen broke some windows and drenched the inside of the house with water.

A police officer asked his wife to try to talk him out of his plans, but he refused to listen to her, shouting that neither he nor his son would leave the building alive.

When he began to stab the child, officers opened fire at him through one of the broken windows.

After the firefighters finally cut their way into the section of the house where he had barricaded himself and the child, the taxi driver was found suffering from gunshot wounds while his son had multiple stab wounds. They were both rushed to the Cornwall Regional Hospital, where the taxi driver died and his son was admitted in a serious but stable condition.

A subsequent search of the house turned up a police ballistic vest, handcuff keys, and dozens of injection needles.

Before sunrise, gunmen would continue to spill blood in the parish capital, snuffing out two lives and bringing the parish’s murder tally to 53 since the start of the year.

Shortly after 2 a.m., a gunman ambushed 30-year-old Christopher Reid, a labourer of Barnett Lane in downtown Montego Bay, as he stood outside a shop near his home, killing him on the spot.

At about 2:30 a.m., loud explosions were heard along McCatty Street, also in downtown Montego Bay. When the police went to the location, 67-year-old taxi operator Robert Gooden’s body was seen in the middle of the roadway, with gunshot wounds to the chest.