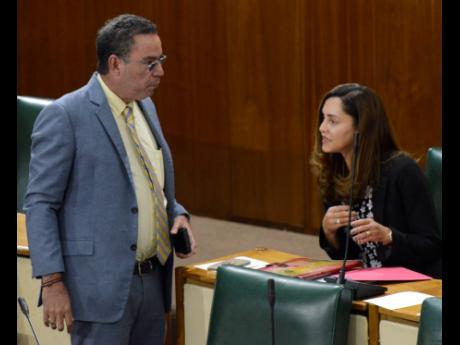 Ian Allen/Staff Photographer
Daryl Vaz and his wife Ann-Marie, both members of parliament, have a discussion in the Lower House on Tuesday, April 30.

The Holness administration, Minister without Portfolio Daryl Vaz, and the Urban Development Corporation (UDC) have been slammed by the Office of the Contractor General (OCG) for their role in the sale of beach property to Puerto Caribe Properties Limited, operators of Moon Palace Jamaica Grande Hotel, saying that the Government virtually gave away a US$13.5-million property for US$7.2 million in the name of development.

The company also walked away with the Moon Palace beach, valued at US$3.5 million, for free.

The long-awaited findings that were tabled in the House of Representatives yesterday showed that the property was valued at US$13.5 million at its highest and US$11.8 million at the lowest. However, ministerial pressure and interference from Vaz, the de facto minister of economic growth and job creation, within whose purview the UDC falls, were cited as weakening the UDC, leaving taxpayers J$1.3 billion poorer, at today’s rate, in the vexed deal.

According to the OCG, the lands were sold “below market price, and the Government did not optimise income from the divestment process.

“The initial offer was US$7 million for lands ... valued [at] US$12.6 million. The offer included beach lands registered at Volume 1236, Folio 249, leased in the amount of US$17,295.15 per annum with an average value of US$3.5 million. This offer is an insult to the Jamaican people, and the acceptance of the offer is tantamount to a departure by the UDC, the ministry and, ultimately, the Cabinet from fiscal responsibility and good governance,” stated the OCG.

“The beach lands [were] leased in the sum US$17,295.15 per annum with an average value of US$3.5 million and [were] handed over to the owners by the consent of Minister Daryl Vaz and the non-objection of the prime minister,” the report said, adding that the sale price did not reflect the value of the beach.

“Negotiations were done at the ministerial level,” the OCG cited the UDC as saying.

In criticising Vaz, the OCG referenced minutes of the 486th meeting of the UDC board, noting that “the Honourable Minister Daryl Vaz advised the meeting that should there be any matter needed to be dealt with urgently, that it should be brought to his attention and he would have it dealt with, which points to how pivotal the minister’s role was to the divestment process”.

The OCG said that it appeared that “the UDC was unable to negotiate freely and from a position of ‘strength’ with Puerto Caribe Properties Limited because of the direct involvement of the Honourable Minister Daryl Vaz and other state agencies … “.

However, the prime minister said that meetings at the ministerial level could not be accurately described as negotiations as the purchasers were advised according to the GOJ divestment policy to apply and negotiate directly with the UDC regarding their interest in acquiring government lands.