Relief! - Leaders hope state of emergency will drive down murders in Wild West 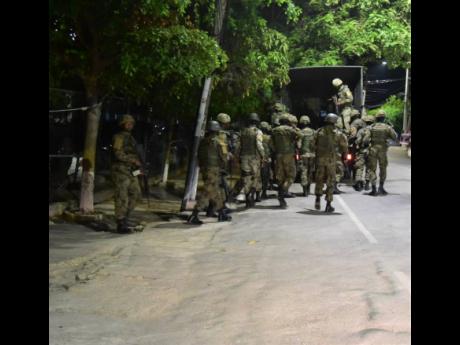 Photo by Albert Ferguson
Soldiers amass outside the Savanna-la-Mar Police Station on Great George Street in Westmoreland on Tuesday as a state of public emergency took effect yesterday in three western parish, including St James and Hanover.

Tourism interests, municipal authorities, and everyday citizens welcomed the news that the parishes, which collectively recorded 105 murders up to April 22, would see a significant boost in resources to aid the crime fight.

Not counting Kingston and St Andrew with a per-capita murder rate of 21/100,000, Hanover, St James, and Westmoreland have the three highest homicide rates in the country this year, Police Commissioner Major General Antony Anderson said yesterday.

Anderson signalled that the western arc’s aggregate murders – representing more than a quarter of the island’s 410 homicides recorded up to last week Monday – prompted the security forces to request that a state of public emergency be declared. It will initially remain in effect for 14 days.

In St James, which ended a yearlong SOE on January 31 this year, banker Winston Lawson, the president of the Montego Bay Chamber of Commerce and Industry (MBCCI), said he was happy for the resumption of the crime-fighting measure but asked that the authorities exercise leniency in the opening hours for businesses.

After seeing a drastic reduction in murders last year under the SOE – which saw homicides falling from a high of 335 in 2017 to 102 in 2018 – killings have surged again, with 49 victims recorded up to April 22, according to data released yesterday.

The MBCCI outlined areas that it would like to see improved upon over the previous SOE.

“Given the experiences and takeaways of the SOE of 2018, the chamber ... appeals that the opportunity is utilised to not only yet again save hundreds of lives, but to improve on prior identified shortcomings and concerns ... ,” the chamber said in a press statement issued yesterday.

It called for more judicious and intelligence-based decision-making in the detention of suspects; improved results in gun recovery from the criminal underworld; habitable lock-up and detention areas; and urged the authorities to expedite reforms, policies, and strategies to sustain the suppression of crime.

In Westmoreland, which emerged as western Jamaica’s murder capital last year as the SOE kept St James in check, Custos Hartley Perrin was relieved as the police and military rolled into the parish, which recorded 141 murders in 2018 and 43 up to April 22 this year.

“It has been long in coming, but in light of the many murders that we have been seeing, I believe the people would have been expecting this type of intervention,” said Perrin. “If we can get the type of success that was realised in St James last year in terms of the reduction in murders, we will be on course to fix this crime problem.

“My hope is that while we would not want to see any violation of the human rights of the residents, we would certainly like to see more criminal elements arrested than was the case in Montego Bay,” noted Perrin. “I would also love to see far more illegal guns taken off the streets.”

Hanover Custos Dr David Stair urged the security forces to stem the flow of illegal guns into the island and focus on taking down criminal masterminds.

Speaking at yesterday’s Jamaica House press conference to announce the security initiative, Anderson said that Westmoreland “was the most murder-dense place in the country, followed by Hanover”.

“St James has gone up 70 per cent over where it was last year this time, and Hanover is still significantly high,” he told journalists.

“It was these figures and the challenge of violence in these places that caused myself and the CDS (chief of defence staff of the Jamaica Defence Force, Lieutenant General Rocky Meade) to recommend to the prime minister that we declare a state of emergency in these areas.”

Said Anderson:”We must save lives.”

Meade concurred, saying that the “informed assessment” of the security forces is that the high level of murder, shootings, gang activity, and the illegal trade of guns and drugs, “is of such a nature and on such an extensive scale that it endangers public safety”.

Last December, the parliamentary Opposition voted against any further extensions of the three states of public emergency that were in place in St James, the St Catherine North Police Division, and across three police divisions in the Corporate Area.

Holness said members of the Opposition were informed before the new SOE declaration was made and “we await to see what their response will be”.