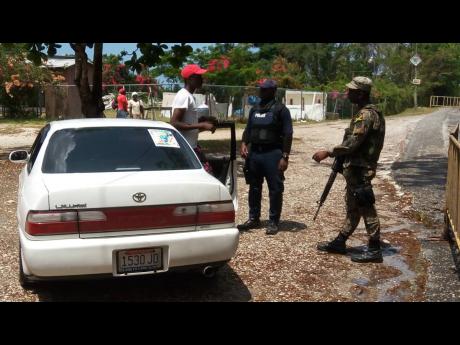 Hopeton Bucknor
A motorist exits the vehicle after being pulled over at a checkpoint as the security forces stepped up operations under the state of public emergency now under way in Westmoreland, Hanover, and Trelawny. 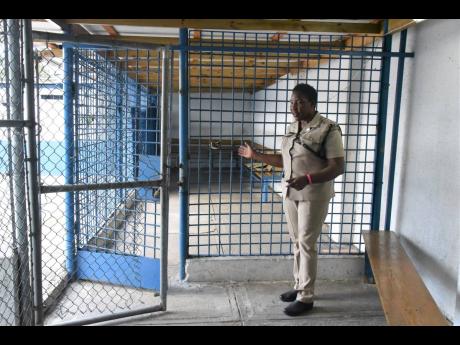 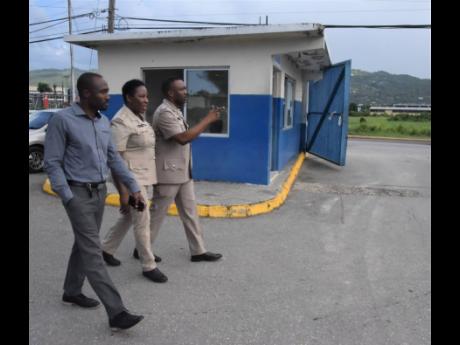 Dozens of persons have been detained and at least one gun and several rounds of ammunition found as the security forces crank up their operations under a 14-day state of emergency imposed in three western parishes on Tuesday to get a grip on crime.

Speaking with The Gleaner late yesterday, Deputy Superintendent Dahlia Garrick, who heads the police’s Corporate Communications Unit, described the first 24 hours of the crime-fighting initiative as being reasonably successful.

She said the police recovered one firearm and several rounds of ammunition in Little London, Westmoreland, and investigations are continuing into that seizure.

There were unconfirmed reports last night of the seizure of nearly 1,800 rounds of ammunition in MoBay.

Turning to detentions, Garrick said: “Thirty persons have been taken into custody, some of whom have already been processed and released. We will continue the processing of the detainees over the course of the next 24 hours, and those that the police have interest in will be placed into custody,” Garrick said, breaking down the figure to reveal 11 persons detained in Westmoreland, 10 in Hanover, and nine in St James.

“The security forces are committed to upholding the human rights and dignity of all detainees,” she emphasised.

The police in St James, where a year-long state of emergency ended in January, have reported that the detention facilities at the Montego Bay Police Station in Freeport are much better than the last time around.

They gave that assurance on Tuesday, following a tour with the Independent Commission of Investigations’ western regional director of complaints Errol Chattoo.

Deputy Superintendent Angela McIntosh Gayle told The Gleaner that the holding areas for persons under the SOE are adequate to humanely accommodate persons detained during operations.

Last year, Public Defender Arlene Harrison-Henry told Parliament that the conditions under which persons were being detained under the then SOE were inhumane and not fit for human habitation and that there were no data on many of the detainees.

“From the public defender’s report, we would have had training. We had persons from the legal branch, so they would have provided guidance on the state of public emergency and the zones of special operations acts. We are very much more informed, sensitised, and educated, so we are better able to do our job,” McIntosh Gayle told The Gleaner during a tour of the holding areas yesterday evening.

She said that the data-collection process has also been improved this time around.

“Prior to them (detainees) being admitted in custody, we have a prescribed form which is completed by the officer who has detained them. Additionally, we have a station diary, so once a person comes into our custody, we ensure that we log their information. So we have the station diary, the detain-in-custody register, the charge and property register, and we also have the electronic version to ensure the capturing of information and proper accountability.”

Under the previous state of emergency, several detainees had complained that they were poorly fed in custody. The police said special attention has been paid to this area, and there should be a marked improvement in this area.

“For humanitarian purposes, we would have gone ahead and purchased items for persons who will be detained,” McIntosh Gayle told The Gleaner. “Let’s say they (detainees) come in after supper is served at 6 p.m. If they are hungry, we would give them a cup of tea and something to eat. We have Igloos for water, and those who were detained on Tuesday got cheese bread and a cup of tea.

“We put everything in place for proper accountability and we ensured that those who were with us, their human rights were not breached,” she emphasised.

As the Gleaner team moved across the three parishes yesterday, members of the security forces were seen fortifying and establishing new checkpoints and conducting searches in communities such as Grange Hill and Little London in Westmoreland.

“This is the best thing that could happen to Westmoreland,” a Savanna-la-Mar businesswoman told The Gleaner yesterday. “Last night was the first night I got a good sleep in a long while. I felt comfortable knowing the police and soldiers were out there.”

Residents and critics have, however, questioned the effectiveness of the strategy, calling for a more long-term fix to the nation’s crime problem.

“The very fact that after more than one year after the SOE in St James there has been this resurgence of criminal activity underscores the fact that an SOE without other anti-crime measures that single out and target the producers and perpetrators of violence and bring them to justice will not provide the level of security that the country deserves,” People’s National Party President Dr Peter Phillips said on Tuesday.

“We expect that the accompanying regulations will be announced along with the appropriate tribunal to ensure that the rights of the people are protected. We continue to insist that there is scope in others areas to utilise the zones of special operations, which is a long-term crime-fighting measure, given that there are communities of high criminal activities across the country, especially in the Corporate Area and Clarendon,” the opposition leader said.