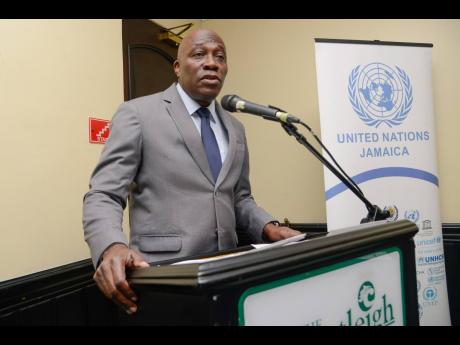 Shorn Hector
Chief Justice Bryan Sykes has warned the police that there will be an “unpleasant outcome” if they allow prisoners to smoke on the grounds of the Supreme Court.

Chief Justice Bryan Sykes has warned that there will be serious consequences for police personnel who continue to facilitate the smoking of ganja by detainees inside holding cells at the Supreme Court building in downtown Kingston.

For days, there have been mutterings among users of the court about the strong scent of marijuana within the precincts, especially in the afternoon.

“It really needs to stop. So I am going to put the police on notice. The police aiming to maintain the order in the building means preventing ganja smoking ... down there (holding area).

He made these comments shortly after the trial of reputed gang leader Uchence Wilson and his 23 alleged cronies resumed after the luncheon adjournment yesterday afternoon.

“This is supposed to be the last day that we are coming into court, and the passages, the courtroom (are), filled with the smell of ganja. No smoking is to take place, whether it is ganja, tobacco, grass, whatever it may be. Failure to do that, separate and apart from being in breach of some regulation … regarding holding prisoners, there is also the question of liability,” the chief justice said yesterday.

Sykes also fumed that Fridays at the Supreme Court represented “one of the largest ganja-smoking sessions in Jamaica down in the cells. So now, the police need to act and act decisively,” he said.

In January 2015, then Supreme Court judge Lennox Campbell expressed frustration that prisoners in custody at the court continued to breach the law by smoking ganja.

At the time, he lamented that the offence happens with great frequency and that he was amazed that it was occurring within the precincts of the court.