Men on police’s radar picked up in SOE operations 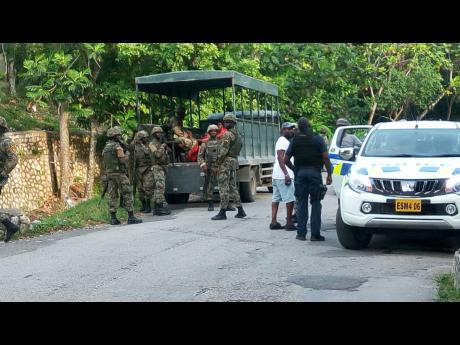 Hopeton Bucknor
The joint security forces carrying out operations under the state of emergency in the vicinity of the Camp Road and Bamboo Drive intersection in Hopewell, Hanover, yesterday.

The police are reporting that a number of persons of interest in crimes have been picked up in dragnets under the state of emergency now blanketing three western parishes.

Yesterday, the joint security forces targeted various communities within the parishes of Hanover, detaining more than 20 persons. Several of the men taken into custody were picked up in Rejoin, Bamboo, Camp Road, Old Pen, and Hopewell.

One senior officer told The Gleaner that several of them are considered persons of interest in connection to various crimes committed in the parish of Hanover.

According to the senior officer, the security forces will be focusing their attention on several of these communities, following an upsurge of murders and other serious crimes in those areas.

“The police will be pressing onwards in a zero-tolerance mode across these communities in a bid to rid them of the criminals and get the guns,” the senior cop added.

Since Prime Minister Andrew Holness declared the state of emergency in St James, Hanover, and Westmoreland on Tuesday, at least 60 men have been taken into custody across the three parishes.

So far, the police have reported the seizure of one illegal firearm and several rounds of ammunition in Little London, Westmoreland.

More than 1,800 rounds of ammunition were also discovered at a warehouse in Montego Bay on Wednesday.

The Gleaner observed traffic jams at a number of checkpoints yesterday as motorists complied with the respective rules on their approach.

In Hopewell, Hanover, residents were celebrating the state of emergency, telling The Gleaner they were pleased with Holness’ decision, hoping it will have a lasting impact on stemming the lawlessness in the three parishes.

The state of emergency will last for an initial period of 14 days.