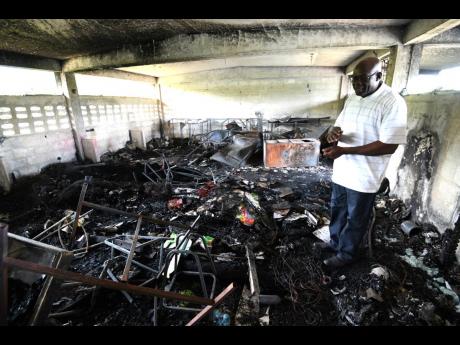 It was the symbol of potential and the structure housing artwork that had copped prestigious awards, but the arts block of the Seaforth High School stood bare and charred yesterday after fire ravaged the building early yesterday morning.

The scene left hearts broken and eyes watery as students, teachers, and community handymen picked through the charred debris of nearly 50 years of history.

Reports are that approximately 5 o’clock in the morning, caretakers at the St Thomas school were alerted to the fire, which was apparently caused by electrical dysfunction.

The school was scheduled to be rewired, having been previously found to have electrical short circuiting, but that exercise did not happen in time.

The building has been severely compromised as sections had visible cracks, resulting in leaks and material exposure.

Principal of Seaford High, Colbert Thomas, told The Sunday Gleaner yesterday that while the school was hit hard as a result of the fire, he was determined to pick up the pieces and rebuild.

“It’s the signature of the school, you know,” a sombre-sounding Thomas said, pointing to artwork produced by students hanging on the walls of his office mere metres away from the scorched block.

“Visual arts is really the signature of Seaforth School … the technical and vocational areas. Whenever the ministers are going to have any functions, and so on, they send to Seaforth,” Thomas added, as he highlighted the successes of the department.

The principal said that he has had to console both students and teachers in the aftermath.

“My concern from a school perspective is not even so much the building, but the students and their examinations. The amount of students who will be affected is serious,” Thomas said, explaining that nearly 50 students used the block to prepare for external exams administered by the Caribbean Examinations Council.

Seaforth’s Jahmanio Council was the most outstanding art and design candidate for the Caribbean Advanced Proficiency Examination for the 2017 sitting in Jamaica, and topped the region as well.

“When that department has been affected … it affects the entire school. I have to be talking to the head of department and saying to him, ‘Relax!’ because he came to me and said, ‘Sir, I am weak’,” Thomas shared as he sought to paint a picture of the importance of the Arts Department to the school community.

Looking ahead, the principal said the administration of the school would be putting in place contingency plans to ensure that school reopens tomorrow but stressed that there was great need of resources to help rebuild.

“I need tables for the visual arts students, I need stools, and I also need plyboard and other boards because I am trying to build a temporary area where students can practise,” he said, adding that the Ministry of Education has intervened.