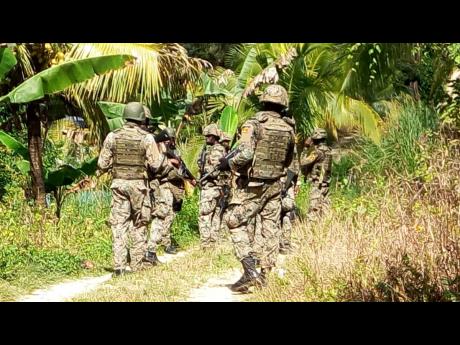 Photo by Hopeton Bucknor
Soldiers conducting an operation in Cambridge, St James, last week under the state of emergency across St James, Hanover and Westmoreland.

Two men have been taken into custody in connection with the seizure of an illegal firearm in Hanover by the security forces carrying out operations under the state of emergency (SOE) across three western parishes.

Reports are that about 7 p.m. on Saturday, an operation was carried out at a premises in Jericho district, which yielded one unassembled .357 pistol. Both persons who were at the premises were taken into custody. The police have withheld their identities pending further investigation.

This is the second illegal firearm seized by the police-military team under the SOE in Hanover, St James and Westmoreland since last week Tuesday.

The first illegal weapon, along with seven rounds of ammunition, was seized during an operation carried out at Broughton, Westmoreland, last Wednesday.

Last Thursday, the security forces also found more than 1,800 rounds of ammunition at warehouse in Freeport, Montego Bay, St James. Prior to that, two live 12-gauge cartridges were seized during an operation in Salt Spring, also in St James.

Meanwhile, more than 100 men have already been taken into custody under the SOE across all three parishes.

The police say several of these men have been processed and released, while those who are considered to be of interest in current criminal investigations remain in custody.

Residents across western Jamaica continue to sing the praises of the SOE operations, saying they go about their daily activities feeling safer.