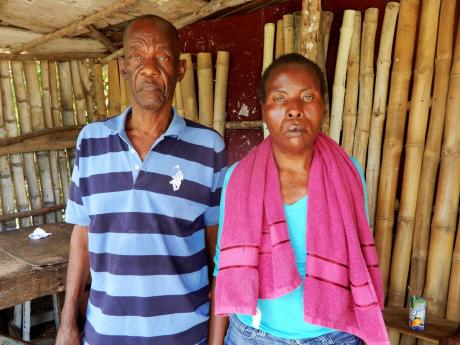 PHOTO BY CARL GILCHRIST
Jacqueline Smiley, mother of the two girls who died in the crash, with their grandfather, Noel Bryan.

Some say it was fate. After the party at Galina, St Mary, on Sunday morning, sisters Nicoda Bryan and Simone Bryan called Rudolph Alphanso Henry and asked for a ride home on his Yamaha R6 motorbike.

A third female insisted she also wanted a ride, but the bike wouldn’t start. After the third female stepped away, the bike sprang to life and departed.

Tragically, the three never made it home.

Henry, 36, affectionately called ‘Phanso’, 22-year-old Nicoda and her 16-year-old sister Simone, a student of the Oracabessa High School – all of Hamilton Mountain in St Mary – died after the bike crashed into a retaining wall in Oracabessa about 3 a.m.

News of the tragedy shook up the entire Hamilton Mountain and reverberated throughout neighbouring communities and even further afield to the neighbouring parish of St Ann.

For Jacqueline Smiley, losing her only two daughters was like her world collapsing.

“From yesterday mi nuh eat nutten ’til now,” she told The Gleaner yesterday.

“Me was in bed. Mi next-door neighbour come call me ’cause the bike crash, and Puttus (Nicoda) dead and the next one (Simone) gone a hospital and she dead after. Mi haffi run an’ go a di spot and lie dung pon har (Nicoda) because me never see the smallest one.”

Simone, who was in grade nine, was preparing to do end-of-year exams to gain promotion to grade 10.

“She say she want to hurry and leave school and help her father and me because her father sickly,” Smiley said.

The mother now shoulders the responsibility of funeral arrangements, and according to her, “Mi don’t have no help. I need help.”

“Mi feel bad, bad, bad because when mi madda dead, mi never feel it like when these two dead. Mi cry every minute because them nice. The younger one say she a go leave school and try go inna the army,” Bryan said.

On Monday, a team from the Ministry of Education visited the Oracabessa High School and then the family of the student who died.

“We visited the school where we spent some time offering psychosocial support to the class that Abigail (Simone) was from, and we met with her friends. We had individual sessions with them. So now, we’re visiting with the family to offer further psychosocial support and to offer condolences from the ministry and to see how the ministry can assist and support them going forward,” explained Angella Murphy, guidance and counselling education officer, Region Two, who, along with Tracy Panton, educational social worker and a guidance counsellor at Oracabessa High, visited the family.

The girls’ father, Patrick Bryan, said that the older sister was feeling discomfort in one of her legs and requested that Simone accompany her to hospital.

However, a police report is suggesting that at no time did the girls visit any hospital, but, instead, had made plans with Henry to accompany him to a dance in Port Maria, where they were seen partying.

According to the report, it was while transporting the sisters back home that, upon reaching a section of the Race Course main road, Henry lost control of the motorbike, which slammed into a retaining wall.

All three passengers were thrown from the vehicle and the younger sister was pronounced dead at the accident scene, while Henry and the elder sister, who were rushed to hospital, were later pronounced dead.

The police have since stepped up their operation along the main road, and have intensified spot checks and speed traps, which they hope will be a deterrent to speeding.

“All this morning (Sunday) when me a go out, mi all drop dung a crossroad,” Bryan said.

“Trust me, couldn’t manage it. A mi friend dem tek mi up and buy one bottle a water gi mi,” the grieving father added.

A short distance away, Henry’s mom, Eslyn Johnson, was retrospective. Two of her grandchildren were just made fatherless.

“A lot of things going through me right now,” she said, trying to put her feelings into words.

It was around 5 a.m. when a relative, Nora, brought the heart-rending news.

“Phanso is a quiet guy, him work down a one garage down at Rio Neuvo. Him is a faithful, faithful guy an’ him is a good spray man. Everybody want dem car fi do, dem carry it to him,”she said of her son.

She also expressed gratitude for the support she has been getting from the community.