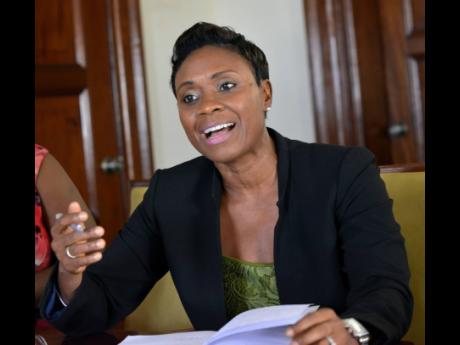 A 17-year-old schoolgirl who was battered, then raped by her assailant in Above Rocks, St Catherine, nearly two weeks ago, is now unable to walk and suffering from seizures as a result of her injuries.

The accused perpetrator of the Above Rocks attack was caught and is in police custody awaiting a court date.

While the incident took place outside the borders of Juliet Cuthbert-Flynn’s West Rural St Andrew constituency, where schoolgirl Shantae Skyers was killed last month, she said that it once again reinforced the need to protect the nation’s children.

“It is very heart-wrenching because this is actually someone I am aware of. I was at a sports day with her. This happened in the middle of the day.

“... She went to drop off something at school and was standing at the bus stop, and this savage person beat her to a pulp, and then raped her. Something has to be done. Why are the men preying on women and children in this fashion? It is insane,” said Cuthbert-Flynn.

According to the MP, the teen’s mother is beside herself with grief and is worried that the traumatic event could affect her daughter for the rest of her life.

“We have seen a few days ago that about 100 children have been raped this year, many of them killed,” Cuthbert-Flynn added.

“It is crazy what’s happening. I think where this is coming from is the breakdown in society. Imagine now what this child’s mother is dealing with,” said Cuthbert-Flynn.

In expressing consternation, Children’s Advocate Diahann Gordon Harrison said that her concern was with the victim, who will have to live with the scars of the heinous attack forever.

Gordon Harrison said the savagery meted out to the teen was indicative of the “baseness in our society, and in our men who are doing these things”.

“Some persons put out there the view that when you have a victim of rape – especially when it’s very violent and there [are] aggravating factors, as this incident reveals – it’s worse than murder. Because what it means is that a victim is going to have to live with this for the remainder of her life.

“And that victim will have to deal with not just the physical scars and the memories and the invasion of that person’s space, but may have to deal with a very serious case of mental-health issues, sometimes in the form of aggression, or severe bouts of depression, and post-traumatic stress disorder,” the children’s advocate added.