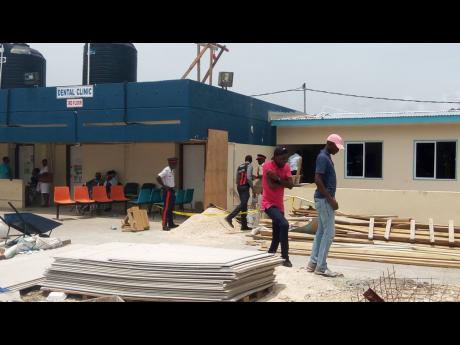 Photo by Hopeton Bucknor
Police investigators at the construction site where a disgruntled employee opened fire on two colleagues at the Cornwall Regional Hospital in Mount Salem, St James, yesterday.

Gunfire rocked the compound of the Cornwall Regional Hospital (CRH) in Montego Bay, St James, yesterday morning when an irate construction worker shot and seriously injured two of colleagues and then fled the location. He is still on the run.

The injured workers, whose identities the police have withheld, are said to be from Kingston addresses. One is said to be 36 years old and the other is 24. They were reportedly part of a crew doing restoration work on the nurses’ quarters at the Mt Salem-based hospital.

According to reports, about 11:30 a.m., the men got into a quarrel after a bucket that was being used to haul concrete mixture via a pulley, became dislodged and fell, narrowly missing the head of a supervisor. The 36-year-old worker reportedly scolded the employee who was manning the pulley, and they got into a heated argument.

The man who was being scolded reportedly got agitated and ran from the site towards a section of the Mount Salem community. He returned minutes later armed with a handgun.

“All a wi affi scatter and run fi wi life when we see di man come back with the gun and start fire shot,” said one of the construction workers who witnessed the drama.

When the shooting ended and the shooter made good his escape, it was discovered that the 36-year-old was shot seven times, while the 24-year-old, who was caught in the line of fire, also suffered bullet wounds. Both men were rushed to the hospital’s Accident and Emergency Unit, where they were admitted.

“It was like a movie … . It was a sight to witness,” said another construction worker. “Him (the man with multiple bullet wounds) strong bad, because a nuff shot him get.”

Detectives from the Freeport Police Station in Montego Bay, who were early on the scene, carried out searches in nearby bushes for the shooter, but he was not found. They have since launched a manhunt for him.

Yesterday’s shooting is the second such incident in western Jamaica since a state of public emergency was declared in Hanover, Westmoreland, and St James last week. On Sunday night, a taxi operator was shot and injured by a lone gunman while he sat inside his car along the Chantilly main road in Savanna-la-Mar, Westmoreland.