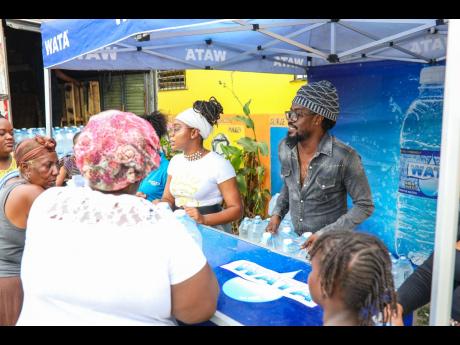 The plight of Waterhouse residents who have suffered from empty faucets in their homes for up to six months yesterday captivated the attention of dancehall star Moses ‘Beenie Man’ Davis, who mobilised his foundation to ensure that especially families with young children have access to potable water.

Residents lamented the chronic lock-offs during a visit to the West Central St Andrew community on Tuesday, some even declaring that they were willing to give up electricity for water, while others threatened to block the nearby Washington Boulevard.

The foundation’s help so far was not enough to quench the thirst of every resident, but Beenie Man’s spouse, Krystal Tomlinson, told The Gleaner yesterday that they engaged corporate entities such as Wisynco, a major bottled-water distributor, to reach out to the community.

“From time to time, Bennie Man is in the area to record music, have a drink, or attend a party. People have been complaining that ‘we naa nuh water and it is difficult for us’,” said Tomlinson, who is also president of the People’s National Party Youth Organisation.

“But it really got bad when persons literally were walking past him with handcarts loaded with water containers. I visited the community on his behalf last week because he wanted to learn the full extent of the problem and how a solution could come in the short term.”

When visiting homes last week, Tomlinson said she was bombarded with stories of utter desperation.

“They pointed out what they had to do to wash and cook; how children were getting diarrhoea from drinking and cooking with dirty water. One family pointed to fungus on their skin from having to bathe with dirty water. Children have had to stay home from school,” Tomlinson told The Gleaner yesterday.

“Some schools are open only three or four days a week, because there’s no water to run canteens or flush toilets. We paid one truck to deliver water last week Friday, and then we reached out to Wisynco, who delivered a request of around 200 cases of water on Tuesday to a lot of households with babies.”

Water-supply shortages have become routine for residents of Waterhouse and other sections of the Corporate Area because of pipeline breaks linked to the multibillion-dollar Mandela Highway expansion works. The widening of Constant Spring Road has also contributed to water misery for residents in Cassava Piece and other sections of St Andrew, with more than 120 pipeline breaks in March and April.

Chairman of Wisynco, William Mahfood, who yesterday committed to continue supporting the foundation’s efforts in Waterhouse, described the situation as dire.

“We sent down about a truckload of three-litre bottled water free of charge. Whenever they have a need, they know they can call on us. It is just like a crisis, like a hurricane or an earthquake. If people don’t have running water in their homes for months, what’s the difference between that and a hurricane?” Mahfood told The Gleaner.

Beenie Man, who grew up in Waterhouse, said he was horrified by the grim survival of the residents.

“No dignity nuh inna dat. Nobody should be going through that. I had to do something to help. We are looking at a budget now to make a water shop so people will always have a common space to go to even if nothin naa come from the pipe,” he said.