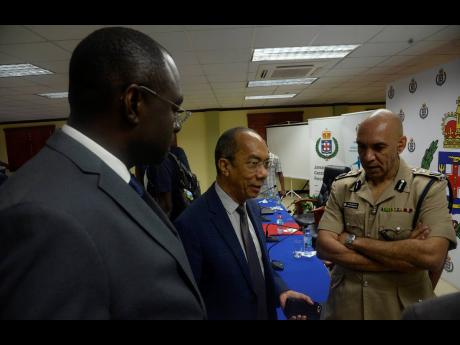 Police Commissioner Major Antony Anderson has described as “very complex” the ongoing investigation into the wild, high-speed chase and gunfight between an off-duty policeman and three of his colleagues in St Catherine last month.

However, 12 days after the incident, which ended with the deaths of a police corporal and a civilian, the top cop yesterday declined to say publicly what he knows about the April 28 events.

“I can understand that 12 days in, you want some information, and we actually have more, but I think how the investigation is going now, it’s very complex,” Anderson said during a press conference at his St Andrew offices.

“It has been so dynamic in terms of [how] information comes out that I don’t want us to get ahead of ourselves on this. I don’t want to report something unless I’m absolutely sure of it. I think that’s the best way forward with this,” he added.

It alleged that businessman Sheldon ‘Junior Biggs’ Daley was shot to death by three rogue cops during a party at Chedwin Park, located on the outskirts of Spanish Town on April 28.

According to reports, they attempted to flee the scene in a police-issued Nissan motor car and were challenged by the off-duty cop, who witnessed the incident.

Corporal Rohan Williams, one of the three cops in the Nissan, and Burrell, a visitor to the island, who was travelling in the other vehicle, were later pronounced dead.

The other two cops, one of whom has been identified as Corporal Kurt Fraser, are now in custody.

Fraser denied that he and the other accused cops had any involvement in Daley’s killing.

He said that the businessman was killed by men travelling in a Nissan Tiida motor car and that he and his colleagues gave chase in their police-issued vehicle before they came under gunfire from men travelling in another vehicle.

Fraser said that Williams and Burrell were shot by a man he believed to be a policeman.

Anderson said that nearly two weeks after the incident, information is still pouring in to investigators.

“Those three organisations, working together, will get to the bottom of it and be able to collectively, release information on it,” Anderson added.