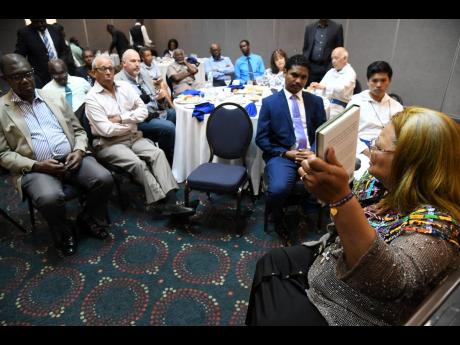 Local church leaders, buoyed by offers of assistance from pro-life groups in the United States (US), are seeking to convince Jamaican lawmaker Juliet Cuthbert-Flynn to withdraw a controversial motion that seeks to legalise abortions.

With Dr Alveda King, niece of famed American civil rights leader Dr Martin Luther King, in the island to offer support, Jamaica CAUSE, the multi-denominational group pushing back against the motion, revealed yesterday that it has sought to hold talks with Cuthbert-Flynn on the contentious issue.

“She has been entertaining our dialogue so far, and we will continue to do that until we get her to withdraw the motion,” president of Jamaica CAUSE, Bishop Dr Alvin Bailey, told The Gleaner yesterday.

However, Cuthbert-Flynn, the member of parliament for St Andrew West Rural, has signalled that she has no intention of backing away from the motion, which is now before a parliamentary committee.

“This is something I would have thought about thoroughly before bringing such a motion – a controversial motion – to Parliament. So it is not something that I intend to withdraw just because a particular group wants me to withdraw,” she said.

“This is something I plan to carry to the end,” the first-time lawmaker insisted.

“There are people out there who I am representing and who I’m speaking up for and I, also, am of the belief that women should have a right to choose depending upon their circumstances,” she added.

Her motion seeks to repeal Sections 72 and 73 of the Offences Against the Person Act, which makes abortion a criminal offence.

Janet Morana, executive director of the US-based anti-abortion group Priests for Life, suggested that one way to convince Jamaican legislators not to approve the controversial motion was for more churches to open up pregnancy centres.

Morana, who, along with King, addressed a breakfast meeting of local church leaders at The Jamaica Pegasus hotel in St Andrew yesterday, indicated that she would bring other groups, such as Heartbeat International, to Jamaica to help establish more pregnancy centres.