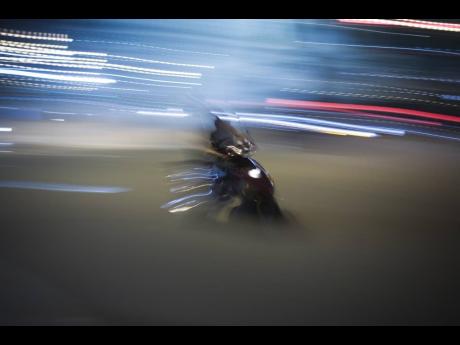 Gang initiation has been fingered as one of the chief factors fuelling the high rate of traffic fatalities across the western Jamaica parish of Westmoreland, as bikers are goaded into deathly stunts and dares to claim kinship and bragging rights in ego-charged clans.

Motorcycle deaths have skyrocketed by 96 per cent when compared with the corresponding period in 2018, a trajectory that is in synch with the narrative of biker anarchy sweeping Westmoreland, one of three parishes that have been under a state of emergency since April 30 this year. To date, of the 55 motorcyclists killed in 2019, Westmoreland leads with nine, with the neighbouring parishes of St James (six), Trelawny (five) and St Elizabeth (five) among the main killing fields.

The central Jamaica parish of Clarendon has had seven motorcycle deaths.

Police and traffic analysts have cited the growing pull of lottery scam networks that are flush with cash fleeced from mainly elderly Americans. According to the authorities, the lottery scammers are no longer concentrated in western Jamaica but have fanned out with a range of decentralised cells in haunts like Clarendon.

Francine White, accident analyst and statistician in the Road Safety Unit in the Ministry of Transport and Mining, said that Westmoreland bikers have formed gangs and riding dangerously through intersections without fear as a form of gang initiation.

A WAY OF LIFE

“For Al Qaeda, one of the bike gangs in Westmoreland, it is seen as a way of life for them in that mainly busy thoroughfare, right in the intersection of Little London. It means that they have to ride across the intersection in busy periods at high speed and you have to ride back across. If you make it, then you are part of the gang,” said White.

Head of the police’s Public Safety and Traffic Enforcement Branch (PSTEB), Assistant Commissioner of Police (ACP) Calvin Allen, confirmed White’s assertion, saying that “if you are lucky to ride whilst the other traffic is flowing in the other direction, then you are seen as one of those to join”.

But as motorcyclists, many of whose bikes are unlicensed and uninsured, run amok in the parish, Allen painted a picture of the police being handcuffed by toothless laws that led to fruitless cat-and-mouse chases. The ACP, whose unit was formed in 2018 from the merger of the Public Safety Unit, Traffic Division and Motorised Patrol Division, said that while the police can seize unlicensed motorcycles, they have no authority to lock up perpetrators.

“Tomorrow or a few days later, you will see them not coming to the police station with documents to reclaim their property, but you will see them driving a new motorcycle. That is the culture of what exists, especially out west, and so we continue to seize. ... Those are some of the realities we have to live with,” Allen told The Sunday Gleaner, citing the easy replaceability of motorbikes which can be bought for as cheaply as $50,000.

“When you find an individual who has taken off the mirrors of the motorcycles, who has taken off the headlight off the motorcycle – I am not making this up, this is what is happening out in the west, and one of the sources in Clarendon is the whole aspect of the lotto scamming, and this is where these guys don’t come back to claim their motorcycles, they are able to easily go and buy again, so very easy money come their way,” Allen told The Sunday Gleaner.