‘Why is he still here?’ - Sexual harassment victim alleges being hounded by Edna Manley teacher 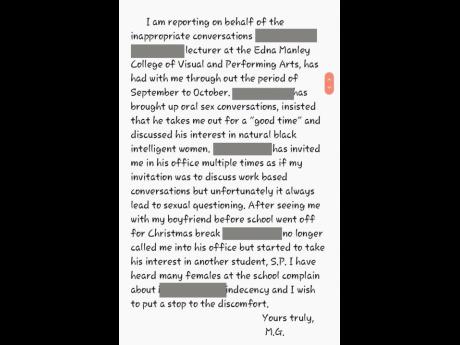 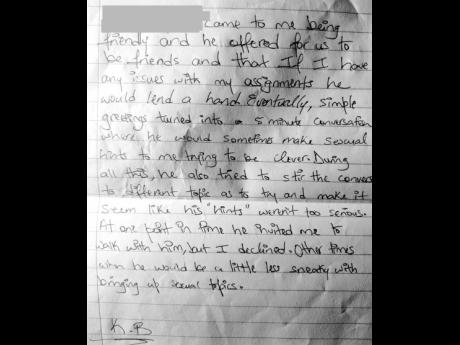 Contributed
Notes detailing sexual harassment claims by a lecturer at Edna Manley College of the Visual and Performing Arts. 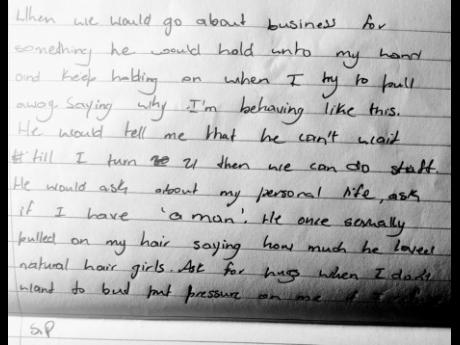 Contributed
Notes detailing sexual harassment by a lecturer at Edna Manley College of the Visual and Performing Arts.
1
2
3

An alleged victim of the sexual harassment saga reverberating throughout the corridors of the Edna Manley College of the Visual and Performing Arts is accusing the school’s administrators of negligence and gross dereliction of duty.

In a tale of betrayal and abuse of power, the student said her ordeal began four years ago when, despite her resistance to the advances of a senior male lecturer, she was continuously hounded and threatened – and eventually victimised.

She further alleged that in spite of making a detailed report to the top brass at Edna Manley – not the first person to have done so – there is nothing to indicate that the matter has been dealt with as a matter of urgency.

“There have been both written and verbal statements from other students who have had similar experiences and nothing has been done as far as I am aware,” she told The Sunday Gleaner, visibly shaken and holding back tears.

“The school has done absolutely nothing, as he is still here. What they have basically done is to sweep it under the rug and pretend that nothing has happened.”

The student said it all started back in 2015 when the lecturer began his flirtation with subtle hints before escalating the tension with more forceful sexual pressure, careful to play off his gestures as a joke.

She said the lecturer would also direct inappropriate comments at other females in class with the justification that “we are all adults; we are all in college”.

“He would often talk about sex and about our bodies – even in the presence of a young 17-year-old student. I just knew it wasn’t appropriate and wondered aloud if anybody else was feeling the same way as I did. At the time I was 20,” the student added.

She said the teacher then began taking sole aim at her, suggesting that they should meet at night for “proper tutoring” and making a number of other not-so-subtle comments about her body.

She said the fact that she had to interact with him more than some of the other students added to her discomfort, especially when he started to send her SMS text messages at night.

“I started his course later in the semester, so I had to kind of go to him for more guidance than some of the other students,” she explained. “He wasn’t the least bit shy about wanting to see me after school hours and seemingly didn’t want to take no for an answer.”

The student said it soon became clear that the lecturer had no intention of letting up, even suggesting that he could assist her with life after Edna Manley, where it would be safe for both of them then to engage in a full-fledged romantic relationship. She told The Sunday Gleaner that he would also try to leverage overseas contacts and his influence in facilitating access to work-and-travel programmes.

“I went to him last semester to see where I was as far as my grade and about areas that I need to improve on,” she noted. “He basically ignored everything I was saying and instead started to ask me questions about my plans after leaving Edna Manley.”

She also described a moment where she said the teacher reached for her hand and tried to hold it suggestively, telling her that it was his birthday.

He would later give her an ultimatum, suggesting that if she was not willing to yield to his advances, her grades could suffer as a result.

“I recall one day when he said he had to meet someone in New Kingston and if I could give him a ride there. I didn’t really want to do it, but I guess the fact that he is the teacher and someone in authority sort of swayed me into giving him a ride.

“On the way to New Kingston, every time I wanted to talk about schoolwork, he would pretty much mock me and say I should loosen up. He also reminded me that I would be needing a lot of help from him during the semester and I would have to pay him for that to happen.”

The student said that while submitting a detailed report of her ordeal to one of the school’s administrators a few weeks ago, she was told that she was the second person to make such a complaint during the semester.

“My dad even followed me to one of the meetings, and there were two other complainants sitting in the waiting area awaiting their turn to lodge complaints. Why is he still there?”