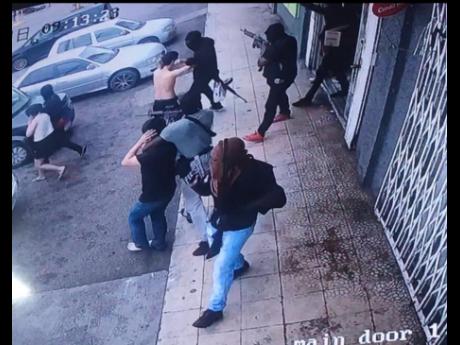 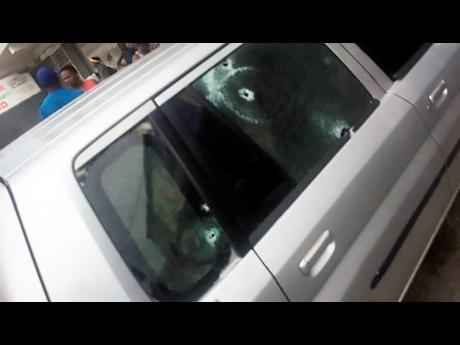 Ramario Scott
A bullet riddled car that was shot up during the attack in Clarendon yesterday. 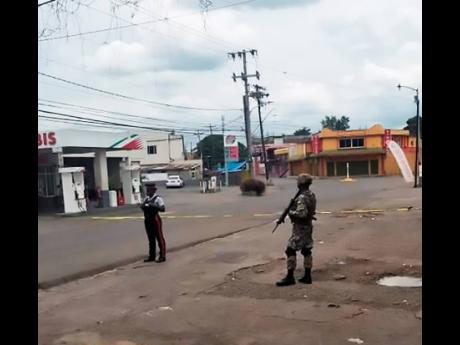 Ramario Scott
A policewoman and a soldier near the crime scene in May Pen, Clarendon yesterday.
1
2
3

Residents of May Pen, Clarendon, have been left terrified following a brazen daylight attack by criminals with high-powered weapons yesterday that left two cops injured.

It is reported that minutes after 9 a.m., two vehicles carrying several gunmen were seen at the premises.

The robbers were surprised by the police and opened fire at them.

The constable sustained gunshot wounds to the face and shoulder, while the sergeant was shot in the abdomen and the groin, The Gleaner has learnt.

The Jamaica Constabulary Force’s Corporate Communications Unit confirmed that the policemen were shot and injured but could not provide an update on their condition.

A white Toyota Probox motor car that was being driven by the gunmen crashed along nearby Howard Avenue in the town after a third cop challenged them as they sought to escape.

The May Pen police have declined to say whether they have held any of the men who were involved in the incident.

Two half-minute-long videos of the gun battle have been making the rounds on social media.

One of the videos shows several spent shells from a 12-gauge shotgun and other firearms on the ground near the targeted supermarket.

Residents are questioning whether the lawmen are adequately equipped to take on gunmen, who they claim have been a menace in the town and its environs.

“The gunman dem a carry bigger and heavier machine than the police. So if dem (police) do come, they can’t win a battle with them, much less the war, because the man dem have it on rapid. So me asking Mr Commissioner to tell May Pen people if we must start look after we self,” said one woman.

The woman, who sells in the Clarendon town, also questioned whether there were sufficient police personnel in Clarendon to handle the crime situation.

Yesterday’s incident has reignited concerns about the absence of an extraordinary security response for Clarendon.

Last month, Police Commissioner Major General Antony Anderson acknowledged that Clarendon posed a serious security risk. However, he said a state of public emergency was not possible at that time, given that one had been declared for the western parishes of Westmoreland, Hanover, and St James.