Seaga – ‘One Don’ of controversy 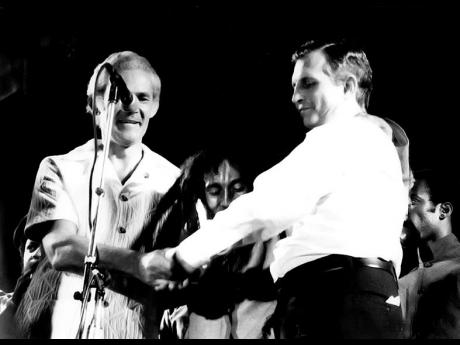 In this iconic Gleaner photograph, reggae star Bob Marley (centre) urges then Prime Minister Michael Manley (left) and then Opposition Leader Edward Seaga, to shake hands at the One Love Peace Concert at the National Stadium on April 22, 1978. The late ‘70s and lead-up to the 1980 general election represented one of the most polarising and bloody periods in modern Jamaican history.

Known as much for his virtue as his vitriol, Edward Phillip George Seaga made decisions and pronouncements that triggered widespread public debate.

For example, his explosive “blood for blood and fire for fire” statement in the 1960s stirred much debate and condemnation from sections of the society.

His declaration that he was the “One Don” in the Jamaica Labour Party (JLP) gave fuel to his political detractors, who charged that he presided over Tivoli Gardens - the so-called ‘mother of all garrisons’.

However, Gleaner columnist and attorney-at-law Gordon Robinson is of the view that Seaga’s “often clear thought and fixity of purpose is confused with divisiveness. Edward Seaga was a man who believed in a clear and defined philosophy and was prepared to follow through with whatever was necessary to bring it to life.

“So he was called ‘controversial’ or ‘divisive’. He was neither. He was no more divisive than his great rival Michael Manley, who exhibited exactly the same characteristics but with more charisma. Where Manley was charismatic, Seaga was pragmatic. Crowds seldom make discoveries. If you separate yourself from the crowd, you suddenly become ‘controversial’.”

According to Robinson, Seaga did more to implement Norman Manley’s charge to the Independence generation than any member of the People’s National Party and his work on the 2011 Charter of Rights was the most seminal contribution to the restructuring of Jamaican society for which Manley called in 1969 made by any politician. Controversial? No. Decisive? No. Great? Definitely!”

Pressed by The Gleaner to comment on Seaga’s penchant for courting controversy, columnist and attorney-at-law Daniel Thwaites said the reputed ‘hard man fi dead’ never sat on the fence – and nor did his admirers and detractors.

According to Thwaites, he learnt that to even discuss Seaga’s life and legacy would be controversial. “Now that he has gone to his Father Who is in Heaven, enjoining that controversy has become inevitable.

He said that while these diametrically opposed sentiments run to the extremes, both are surprisingly prevalent. “It is a barometer of the lasting contentiousness and potential divisiveness of any appraisal of Papa Eddie.”

Thwaites argued that the only other figure in Jamaican political history who could possibly be as controversial as Seaga would be his nemesis, the late former Prime Minister Michael Manley. “And because of their titanic decades-long confrontation, they will be forever – and, perhaps ironically – inextricably linked.”

The Cold War between the United States and the former Soviet Union, which was “hot” on the periphery, such as Jamaica, channelled and focused their conflict, such that both deeply charismatic personas became larger-than-life archetypes and avatars in the country’s consciousness.

Thwaites reasoned that Seaga was a man with deep convictions, “and so we must consider seriously that he didn’t court controversy so much as that it became unavoidable for him”. However that may be, not only had he no problem being at the centre of controversy, he was magnetic to it. And this went beyond, and goes beyond, the usual tussles that always attend political matters.

“Surveying Mr Seaga’s long public life – whether it be the 1950s energetic scholar-musicman-young politician, the ‘60s constitutionalist-firebrand, the ‘70s anti-communist leader, the ‘80s hard-nosed pragmatist PM, or the ‘90s veteran political survivor – we meet the same sharp mind, indomitable will, razor wit, and unshakeable belief that if people listened and did as he commanded, the country would prosper.”

Ewart Walters, another columnist, noted that while the story about the Tivoli Gardens garrison was well known, Seaga paid far more attention to his political party and himself than Jamaica. “It is a statement that can be applied to several succeeding prime ministers,” he added.

On another controversial issue, Walters said that the story was told that Seaga made an attempt to join the People’s National Party at one time. He said this was denied by Seaga.

“When he came back to Jamaica, he went to see Norman Manley, and he agrees with the story up to that point, but he doesn’t agree that the reason he went there was to gain membership in the People’s National Party. He disputes that. He eventually went and joined the Jamaica Labour Party and the rest is history.”