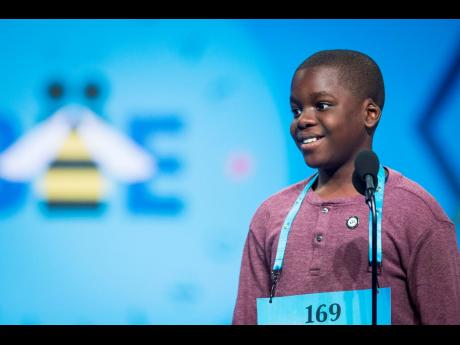 Pete Marovich
Darian Douglas of Jamaica participates in the final round of the 2019 Scripps National Spelling Bee on May 30 in Oxon Hill, Maryland. The Gleaner’s Children’s Own reigning champion was eliminated yesterday.

Though Darian Douglas did not win the 2019 Scripps National Spelling Bee, he is treasuring the experience gained from the competition and brimming with confidence at taking a second shot.

The 11-year-old Gleaner Children’s Own Spelling Bee champion yesterday dropped out at the final stage of the international competition under way in Washington, DC.

Although saddened by his exit, Darian said that he was willing to enter the competition again.

The national speller was aiming to become the second person from outside the United States to win the competition.

Jamaican Jody-Anne Maxwell was the first in 1998.

However, Darian misspelled the word D-I-A-L-L-A-G-E, defined as a figure of speech in which multiple arguments are brought to bear on a single point.

He placed 28th out of the 562 spellers who entered the competition this year.

His coach, Errol Campbell, said that although Darian did not win the competition, he was extremely proud of him for achieving one of their set goals.

“We set two main objectives coming into the competition. One was to make the final, and one was to fight till the very end to get that trophy.

“When I heard the bell, I really felt it for Darian because he really studied and prepared to take the trophy, but overall, we are grateful because he reached the finals and there is a lot to learn and to apply as it relates to future competitions,” Campbell said.

Darian and Ashleigh Jarrett of Immaculate Conception High were both selected to stand on stage for the announcement of finalists in recognition of being one of the top 117 scorers. However, only Darian made it to the finals.

The other local contenders, Titchfield High’s Rhonoya Anderson and Honey Advani of Heinz Simonitsch School, were eliminated after round three of the competition on Wednesday.