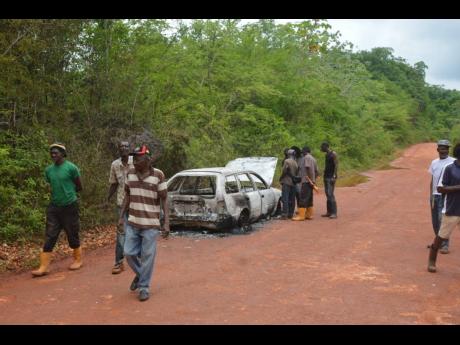 Tamara Bailey
Residents of Ramble, Manchester, look at the burnt-out shell of the car from which the accused killer fled. Photo by Tamara Bailey

The police last night called off the search for a man who was believed to have dramatically jumped into a sinkhole after allegedly chopping to death his eight-month-old baby and injuring the child’s mother.

Superintendent David Whyte, commanding officer for Manchester, told The Gleaner last night that the Jamaica Defence Force and the Jamaica Fire Brigade had been mobilised to attempt to recover the man’s body from the sinkhole.

However, Whyte said investigators now believe that the sinkhole escape theory might have been a “ploy” to throw off the police.

The baby boy has been identified as Roshane McPherson.

The report from the Manchester police is that the quiet, upscale suburb of McKinley Road in Mandeville was jolted at 6:30 yesterday morning by the bloodcurdling screams of a woman who was embroiled in a domestic dispute with her common-law husband.

During the fight, the man used a machete to hack both the eight-month-old and his partner, Racquel Walters. The police said the mother and child were later rushed to hospital, where Roshane succumbed to his injuries while his mother underwent surgery.

The man then drove to a bauxite road near the community of Ramble in Porus, where he allegedly set his car ablaze. The police believe that he may have attempted to commit suicide by leaping into the sinkhole in the nearby district of Broadleaf.

Yesterday’s sitting of the Primary Exit Profile Grade Four performance task test at Ramble Primary, where the woman teaches, was postponed as the school community was left traumatised by the grisly attack.

The Ministry of Education later deployed a trauma team to console teachers and students.

Minister without Portfolio Karl Samuda, who has oversight for the Ministry of Education, expressed regret and outrage at the violent tragedy, saying that partners should seek to resolve disputes by seeking intervention from counsellors.