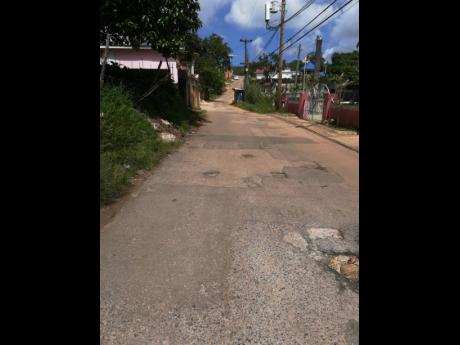 Photo by Tamara Bailey
A deserted roadway in the Bethel Street area of Greenvale, where five persons where shot and injured Thursday evening.

Reports are that approximately 6 p.m., three gunmen travelling in a motor vehicle entered the Bethel Street community in Greenvale, Manchester, alighted from the car and began firing shots, sending about 60 persons who had been enjoying a game of football running for cover.

Four students from Mile Gully, Cross Keys, and Bellefield high schools and one young adult were found suffering from bullet wounds when the dust settled.

Mile Gully High School Principal Christopher Tyme told The Gleaner that one of his students was shot four times – in the shoulder, the hand, and the back – but is in high spirits and is recovering well after surgery.

“I had the privilege of speaking to him and he has even given me a message to take back to school … . He is a 19-year-old grade 11 student, making his way out … . We are grateful and we remain very hopeful.”

The mother of one of the injured boys told The Gleaner that the medical staff did not consider her son’s wound to the buttocks to be serious and that she was happy that the situation did not end up differently and that her son’s life was spared.

“My son wasn’t even playing football. He was walking home from school. His back was turned to the crowd and he was walking up the hill when he felt the hit,” she said.

The other injured persons, whose conditions were also not considered serious, were also at the hospital receiving treatment yesterday.

“No one was expecting this … . One young man said he had just finished playing and sat down when he saw the men with the guns … . Some were able to run. One woman said she froze, and the young Mile Gully High student was found in bushes because he couldn’t run any further after being shot,” Phillips added.

He said the wanton acts of lawlessness across the country have left the nation despondent, and so there is urgent need for a national crime plan.

“We look at the situation of crime in the country and how it is destroying the fabric of our communities, and we have been saying we need to see a national crime plan … . [We are seeing] shootings and murders in Clarendon, St Elizabeth, and we have not seen the requisite response to these situations.

“This is not the Manchester I knew as a child, and something has to be done,” Phillips added.

May, which was celebrated as Child Month, proved to be a tragic 31 days for the nation’s children, with reports of abuse and several children left nursing injuries from violent attacks.

Eight children were also killed between May 1 and 30. Five met their tragic end by the gun, one was stabbed with a knife, and two chopped with machetes. Clarendon recorded three killings, St Andrew South had two, while there was one each in Kingston Eastern, Manchester, and Trelawny.