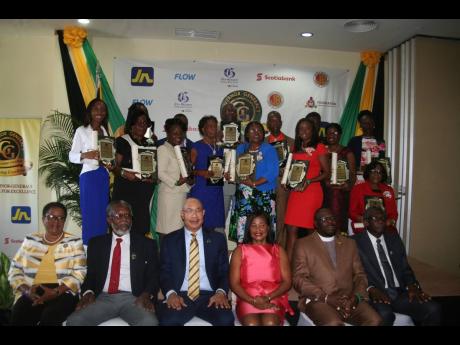 Fourteen outstanding community stalwarts from the county of Cornwall were recognised for their selfless community work and achievements at yesterday’s Governor General’s Achievement Awards ceremony at the Grand Palladium Jamaica Resort and Spa in Point, Hanover

Sir Patrick said the awardees have engaged the social consciousness of persons around them, and, in turn, have not only elevated themselves, but have brought others along with them.

“These coveted awards are being presented to 14 persons who have shown themselves to be leaders. They empowered themselves, and they are also involved in organisations which help persons to do their best and also to be their best,” Sir Patrick said.

“They have achieved academically, they have volunteered, they have donated time and talent, they have shown resilience and strength of character. They have become involved with community projects, mentoring of young people, and started not-for profit organisations.”

The governor general went on to cite examples of some of the work carried out by the recipients from the host parish, Hanover.

“One recipient travelled across the length and breadth of Jamaica to provide free healthcare for individuals with special needs. Another provided food and housing for the homeless, while another gave up personal time on Sundays to tutor GSAT (Grade Six Achievement Test, now subsumed by the Primary Exit Profile exam) students, while himself doing his own studies,” Sir Patrick said.

The governor general emphasised that the recipients are among the Jamaicans helping to hold the country together and strengthen the foundations of a nation that is aspiring to play its part in advancing itself and impact the global community.

“So recipients, what you do has ripple effects. Not only are you impacting Jamaica, but you are involved in a universal effort because when you impact your community, ultimately, you impact your world,” Sir Patrick told the awardees.

He described the group of western Jamaica awardees as beacons of hope and waves of transcendence who believe in their capacity and their potential.