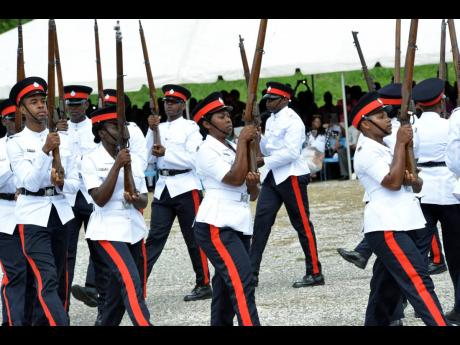 File
Police officers participating in a passing-out parade and awards ceremony in November 2017.

Concerns are mounting over the welfare of cops amid reports of several police officers being overworked as the already undermanned Jamaica Constabulary Force is seeing its resources being stretched even further due to two major security operations in the island.

With a state of emergency (SOE) across three western parishes – St James, Hanover, and Westmoreland – and a zone of special operations (ZOSO) under way in a section of western Kingston gobbling up a number of officers across several divisions who have been recruited to man checkpoints and carry out operations, the Jamaica Constabulary Force (JCF) is having difficulties filling rosters, and probationary police officers are bearing the brunt of the pressure, The Gleaner has learnt.

One probationer told The Gleaner of the long, arduous hours he and others have to work without as much as the mandatory two-hour break between shifts, which they are due.

He said that he has witnessed colleagues working up to 72 hours without a break, having been reminded of their probationary status as a means of intimidation to keep them at their posts.

In addition, several of his colleagues are working without bulletproof vests and ballistic helmets, further putting their lives at danger’s doors.

“The injustice that is I see here is that about 90 per cent of the men and women are probationers, unsupervised persons with less than a year’s service. They are just taken and sent from training school, and while I understand, to some degree, that decision, I can’t get around accepting some of the prevailing conditions under which we, as young officers, are being asked to serve,” said the probationer, who asked to remain anonymous for fear of victimisation.

According to him, some officers were told that they would only be in the ZOSO for two weeks but have ended up spending more than a year. Some are working 72 hours per week, others work 12- to 15-hour shifts before getting a day off, and the prevailing belief is that they can be treated in this fashion because they are probationers.

He further stated that the training for some of these new cops was cut short to shore up boots on the ground for the enhanced security measures, and he expressed concern that this truncated training regimen could jeopardise the officers’ personal security and hamper their efficiency in carrying out their duties.

“Nothing is wrong with having as many police officers in the zone, but something is definitely wrong when they are forced to work these extreme hours per day, at least five days of the week, 72 hours of work, which is beyond what is required or what is ideal for one person by law.

“Officers’ safety means nothing as long as the stocks are up and we can say we say we send out 20 patrols and we get 500 tickets,” he said.

Deputy Superintendent Dahlia Garrick, who heads the JCF’s Corporate Communications Unit, said that it is not unusual to “fast-track” police training to beef up the numbers on the ground.

She said the practice is most visible during times of extraordinary means, such as during an election, at Christmas, and at Easter, and for added personnel in ZOSOs or the SOEs.

“If you enlist and you are in training, and, say, you are there during a peak season, example Easter, then you are sent on the road to get that level of operational exposure, and this ranges sometimes depending on the need, which could be two weeks, a month, six weeks, so it will be done intermittently.

Responding to concerns that the practice could compromise the effectiveness of the young police officers, Garrick said there’s little proof that that’s the case.

“This does not in any way compromise the work of the police because you would have been adequately trained by then to work independently, not negating the duty of the supervisor, but you are trained to ensure that you are able to carry out the letter of the law,” the experienced policewoman said.

She admitted that there was a shortage of bulletproof vests and helmets and that there were problems sourcing vests that fit due to the range in body sizes but noted that the Government has procured some which are to be issued to service members.