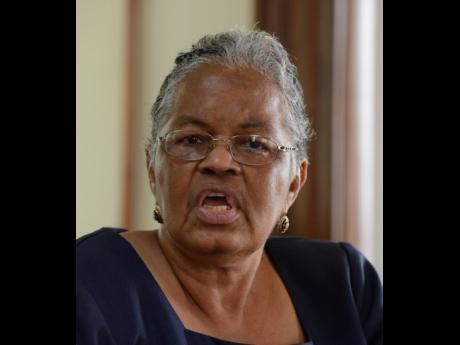 Ian Allen/Photographer
Professor Affette McCaw-Binns says lack of planning in the health sector has resulted in the sector lagging behind in meeting targets and providing optimum service.

A leading academic and researcher has charged that the country’s failure to meet 2015 Millennium Development Goals (MDGs) in relation to maternal and child mortality was a direct result of poor planning in the health sector.

Affette McCaw-Binns, professor of reproductive health epidemiology in the Department of Community Health and Psychiatry at The University of the West Indies (UWI), Mona, said had Jamaican leaders taken a more vested interest in the health sector, the country would be reaping successes in the sector and could have met MDG Goals Four and Five.

The root of the problem lies in decades of neglect, McCaw-Binns told a recent Gleaner Editors’ Forum.

“We have not done much health planning in this country over the last 30 years. Let’s be realistic. The primary healthcare prospective came out in the 1970s, and at that point in time, we sat down and said that we needed a certain number of nurses, doctors and dentists for the size population.

“And that’s the cadre we still probably have in place. So whereas the cadre that was put in place in the 1970s was appropriate for 1.6 million people, now that we are at almost three million, it’s rather insufficient and places extreme strain on the health sector to deliver,” she said.

Pointing to Portmore as an example, she said that while the demography has changed and population shifts are occurring, there has not been the attendant increase in the health budget and planning to counter those social changes.

“The centres of population where people live have shifted. We cannot have the entire population of Portmore coming to Kingston to access secondary healthcare. They are in dire need of a hospital of their own,” McCaw-Binns said. “There needs to be health planning that looks at the population, its growth and development. There’s too much of this piecemeal approach.”

McCaw-Binns said that the talk about community mental health, for example, needs addressing, as many Jamaicans are in dire straits over the lack of social workers in the many rural communities.

Professor Wendel Abel of The UWI’s Department of Community Health and Psychiatry agrees that population growth since the 1970s has not been met with any substantial planning for the health sector, factoring in maternal mortality, especially as it relates to pregnant mothers with mental-health issues.

He said that the population has transitioned with a sizeable aged segment and a growing group of adolescents for which the country had not planned or developed services.

It is instructive, Abel said, to note the planned construction of a paediatric hospital in western Jamaica to augment the long-established Bustamante Hospital for Children in Kingston.

“So these are some of the major issues that are plaguing the country at this time. The [poor] budgetary support, the [lack of] real improvements, training for certain aspects of the sector and the big one – the retention of our nurses – have only served to debilitate the sector, and which partly resulted in the country not achieving aspects of the MDGs,” he said.

The Ministry of Health and Wellness has been allocated a $68-billion slice of the 2019-2020 Budget, but experts fear this will only prove a drop in the bucket to fix the ailing health sector.