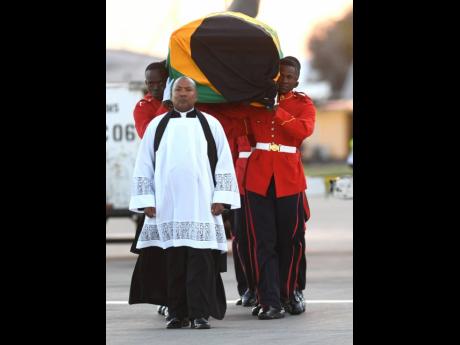 It was Edward Seaga’s last touchdown.

On the tarmac at the Norman Manley International Airport in Kingston were members of the 1st Battalion Jamaica Regiment, decked out in their bright red uniform to execute a pompous welcome, a fitting salute to the former prime minister who died in Miami, Florida, last Tuesday.

At 6:06 p.m., the Caribbean Airlines plane carrying the remains of Seaga landed at the airport as the pastel sunset faded over the airport and at the instant, the military men began playing the Pilgrim Chorus.

Seaga’s coffin was received by a military guard of honour, and as officials, led by Prime Minister Andrew Holness, and relatives watched, comforting each other with an occasional embrace, it was brought to a waiting hearse.

A teary-eyed Mike Henry, a member of the Holness-led Cabinet, told The Gleaner that Seaga’s legacy was rock-solid and should be preserved.

“The State is paying a tribute to a giant servant of the people, someone I worked with very closely, a contemporary, served as his junior minister four times, so I knew his visions, his hopes, dreams and the issues he had to wrestle with,” Henry said.

“I looked at it and I said this is the road that everyone has to take. If we really want to pay truth to his legacy, we must look at all the attributes and the problems and begin to build a better Jamaica.

“I would hope that we could look at his 100 Villages programme, I want us to look at the Afrocentricity of his vision. We must recognise that he was the first prime minister to break the dynastic structure of the plantocracy. So, there was a number of things that he was trying to achieve that was important to the structure of our country.

“He sought ultimately to overcome the divide-and-rule concept – none but ourselves can free our minds. His appreciation of the Afrocentricity of our beginnings stood out,” Henry, the Central Clarendon member of parliament, said.

Culture and Gender Minister Olivia ‘Babsy Grange’ Grange, who was active in yesterday’s proceedings, said she had noted calls for Seaga to be named a national hero, but made it clear that the Government was not focusing on that issue.

She said it was all about honouring the legacy of the former prime minister.

But even as Grange stated that the Government will celebrate his life so far as the protocols will allow, one member of a Revival group, which turned up at the National Stadium last evening, was not pleased that the practice that Seaga had dabbled in while in West Kingston was not included as a part of his welcoming.

Cameron Bryan, a leader in the Revival church said the movement had taken Seaga’s death very hard and wanted to be included in giving the former prime minister a grand send-off.

“He was a staunch Revivalist. He was a Revivalist spiritual leader. He was in charge of churches.

The public will have several opportunities to view Edward Seaga’s remains before he is buried on June 23.

His remains are expected to lie in state at the Jamaica Labour Party headquarters on June 5. There will also be a viewing in Montego Bay on June 7. On June 11 and 12, the body will be in Tivoli Gardens, and on June 19 and 20, public viewing will take place at the National Stadium.

Several events are also planned ahead of his funeral, including a culture tribute on June 18 and a Revival night on June 22.