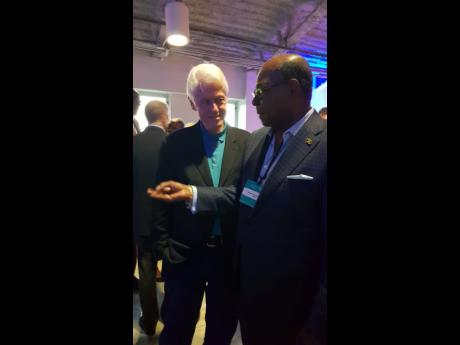 Contributed
Tourism Minister Edmund Bartlett engages former US President Bill Clinton in discussion on the Global Tourism Resilience and Crisis Management Centre in the US Virgin Islands. Clinton showed great interest in supporting the centre and its objectives of building resilience in the region.

The four new partners aim to build the resilience of the Asian tourism product, Bartlett stated in a media release yesterday.

The founder of the 21st-century initiative said the GTRCM, which is being built at The University of the West Indies (UWI), Mona, has taken on a new global perspective.

Nepal will establish theirs over the next eight weeks and will be the first of its kind in Asia, says Deepak Raj Josh, director of the Nepal Tourist Board.

Bartlett, who made the announcement last Friday while participating in a panel discussion at the inaugural Asian Resilience Summit held in Kathmandu, Nepal, shared that the GTRCM in Kathmandu will become the centre for the areas covering China and India.

“The next centre will be established in Hong Kong, and the work is currently going on with the team.”

The GTRCM in Japan will be housed at the Japan International University, which is a private university located in Minamiuonuma city in Niigata Prefecture, Japan.

The first centre, located at The UWI, Mona, was launched at the beginning of the year.

Since 2017, when Jamaica hosted the United Nations World Tourism Organization (UNWTO) Global Conference on Sustainable Tourism, Bartlett has been touting the idea of the centre. It is tasked with creating, producing and generating toolkits, guidelines and policies to handle the recovery process following a disaster.

“These four new centres will position the Global Resilience Centre as a true international construct. The University of the West Indies, which hosts the primary centre, will become the coordinating university for these outstanding other universities which are located across the globe slated to host these new centres,” said the tourism minister.