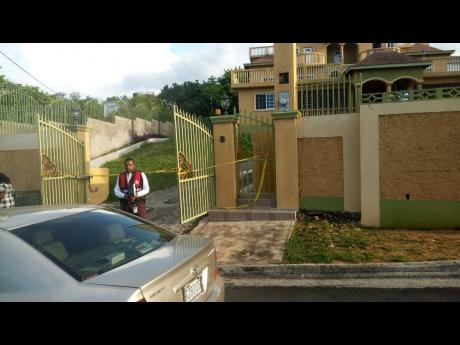 Photo by Hopeton Bucknor
A police investigator at the apartment complex where Raymond ‘Moony’ Kerr’s body was discovered yesterday.

Detectives from the Freeport Police Station in Montego Bay, St James, are trying to piece together clues into the gruesome murder of Raymond ‘Moony’ Kerr, a popular business and sports personality in the Second City.

Kerr’s body was discovered inside his apartment in Appleton Hall, Montego Bay, after relatives who have been unable to contact him since Saturday went in search of him.

A visit to the 53-year-old sports administrator’s apartment led to the discovery of his body, which had multiple stab wounds and the throat slashed.

A Cornwall College old boy, Kerr was a former manager of his alma mater’s football team and the ISSA Western Region representative. He was also the manager of the Aqua Sol Theme Park in Montego Bay and was part of Wexford Court Hotel’s management team.

A senior police officer said based on preliminary investigations, it is believed that Kerr was also robbed.

According to the policeman, Kerr’s vehicle has been reported missing and it is also believed that the killers might have stolen his licensed firearm.

The lawman further stated that the police are now working on some strong leads and expect to make some headway soon.