Greenwich Town on edge after murders 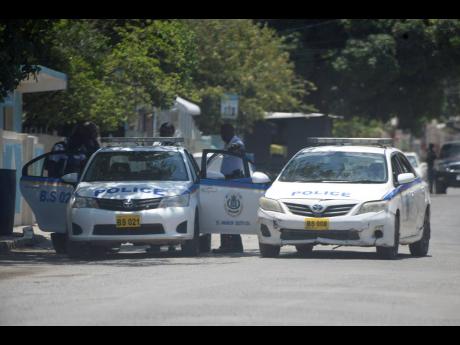 Lionel Rookwood/Photographer
Members of the security forces maintained a strong presence on West Avenue in Greenwich Town, St Andrew, yesterday following the killing of two men in the area on Monday.

A section of Greenwich Town in St Andrew remained tense yesterday as police and soldiers maintained a strong presence in the community following Monday’s shooting death of two men, one of whom was said to be an area leader.

The dead men have been identified as Christopher Palmer, 53, and Andrew Robinson, 43, who were ambushed and shot dead by gunmen on West Avenue in the community less than 24 hours apart.

According to residents, Palmer, who was regarded as a strongman in the area, was standing along the roadway when gunmen drove up and opened fire, hitting him multiple times about 11 a.m.

Around 11 p.m., gunmen struck again, firing at a group of men in the community. Robinson reportedly died on the spot.

Yesterday, as the security forces swarmed the area, residents gathered on street corners, speaking in hushed tones about the possible implications of the murders. Many feared the deaths could trigger the start of a series of clashes between warring gangsters.

Yesterday, the mother of two of Palmer’s children, said gunmen had made an attempt on his life before.

“Dem shot at us about a month ago, but dem escape. Nobody never get shot,” she told The Gleaner as she mourned the loss of the man she said she was with for almost 30 years.