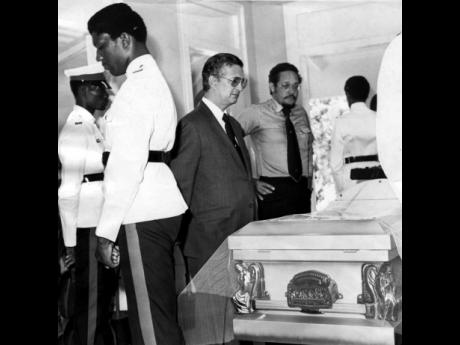 Gleaner file photo
In this August 15, 1977, Gleaner file photo, then Opposition Leader Edward Seaga takes a final look at the body of Sir Alexander Bustamante at the funeral for Jamaica’s first prime minister.

There is discontent over news that the coffin of former Prime Minister Edward Seaga will remain closed as the body lies in state across the island for Jamaicans to pay their final respects to a man hailed as one of the key architects of nationhood.

In announcing the events scheduled to mourn the nation’s fifth prime minister on Monday, Culture Minister Olivia Grange said the coffin would be draped with the national flag and remain closed on all occasions when the body lies in state in Montego Bay, St James, Ocho Rios, St Ann, and Kingston.

She said that this was in accordance with the wishes of the Seaga family.

The decision, however, has not gone down well with some top Jamaica Labour Party (JLP) officials, including Cabinet members, The Gleaner has learnt.

Some party supporters are insisting that the former prime minister would not have been pleased with the closed-coffin arrangement.

“Mr Seaga nuh stuck up, and if him did alive, he would be very mad at what they are doing with him. Let the people see him,” Jean, a long-time Seaga supporter and admirer in the Western Kingston constituency he represented for 43 years, told The Gleaner yesterday.

“He was for the people, and he should be among the people forever. We want to see him, and we want to say, ‘Yes, is him and is not no puss inna bag.’ It cannot work! I am telling you. It can’t work,” she added.

“They’re behaving as if he was uptown. He wasn’t uptown. Mr Seaga sleep with we down here and all ‘bout and him never yet show we no bad face, so mi don’t understand how that come by ... . They should give him to we for even one time,” the supporter said.

High-ranking JLP officials, including Grange, have also come in for criticism for not “standing up” and insisting that the people who have long supported Seaga get a final chance to see him.

They believe the arrangement will result in some persons staying away from the various locations in which the body will lie in state.

“I hear them say that we must walk past the box and pay tribute. That don’t make no sense to me. The box must open and people must get fi see him,” another supporter, who did not want to be identified, said.

“They don’t want us to see him and that is not how we and Mr Seaga live down here. Busta own was open, Sangster and everybody, and out of the whole a dem is Mr Seaga we did know and live with and them do this to we,” the supporter added.

Police had to pacify residents in the Matthews Lane section of West Kingston yesterday as news of the arrangement threatened to boil over as they voiced their anger.

Several angry Jamaicans have also registered their displeasure at the arrangement on social media.

They also raised other concerns, including that the size of the Holy Trinity Cathedral would restrict the number of persons wishing to attend the June 23 funeral before his interment at National Heroes Park.

But at Monday’s press briefing, Grange said: “It was a difficult decision to make, but the family wanted the service to be held in a church, and so we will just have to make appropriate arrangements to accommodate as many persons as we can inside the church and outside of the church.”