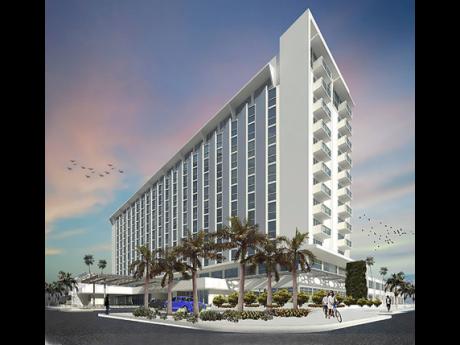 Contributed
An artist’s impression of the ROK Hotel, Kingston, Tapestry Collection by Hilton planned for the Kingston waterfront.

PanJam’s naming of its waterfront development as the ROK Hotel, in partnership with the international brand Hilton, will aid in the revival of the downtown Kingston business district that has been afflicted by urban blight for decades, says business mogul Stephen Facey.

The 12-storey ROK Hotel, which is expected to open in late 2020, will operate 168 rooms on the downtown Kingston waterfront. The top four floors will see 36 apartments and six penthouse units. Apartments go on sale late 2019.

The hotel, which occupies the former Oceana Hotel, will remain fully owned by PanJam but will form part of the Hilton Tapestry brand, which will funnel guests to its doors.

Speaking at PanJam’s annual general meeting held at the Courtyard by Marriott in New Kingston yesterday, Facey, PanJam’s CEO and chairman, said that the group will spend between US$30 million and US$40 million to build the hotel. Oceana was initially acquired by the partners in late 2014 for J$385 million. The redevelopment project was expected to cost around J$6 billion, based on previous reports.

The deal with Hilton signals confidence in the development of the hotel and the further gentrification of downtown Kingston, he said.

“I think the history of downtown Kingston and its demise is wrapped up in the social and political upheaval in the 1970s. A lot has changed in the nearly 50 years. There has been significant new investment downtown and there is a significant biz district downtown,” he said, adding that the return on investment will become more manageable with the sale of apartments.

“There is demand for hotel rooms and we believe it can be a successful project. Those units for sale will bring down the cost of the hotel so it can compete with other hotels in the city of Kingston,” said Facey.

Joanna Banks, senior vice-president of new business development and strategy at PanJam, explained how the investment group intends to leverage the advantages of the Tapestry Collection brand.

“Given PanJam’s vision for the revitalisation of the Kingston waterfront, it was important to us that we partnered with an international flag that allowed us to remain authentic to our culture. Tapestry Collection by Hilton does just that, while giving us the full benefits of the Hilton machine, and guests’ access to the Hilton Honors loyalty programme. I would say that’s a win-win,” said Banks.

Tapestry Collection by Hilton guests will be able to benefit from Hilton Honors, the award-winning guest-loyalty programme for Hilton’s hotel brands that serve more than 60 million members in 104 countries. Hilton Honors members who book directly with Hilton save time and money and gain instant access to the benefits, said Hilton from its website.

In March 2018, PanJam revealed that it acquired full control of the Oceana Hotel project having bought out its Canadian joint venture partner for a purchase price of J$403 million.

“The development of the hospitality sector is heartening, and we see the Kingston market as underserved. If we continue to experience growth in the economy, then there will be demand for more hotel accommodation in the Kingston market,” said Facey.