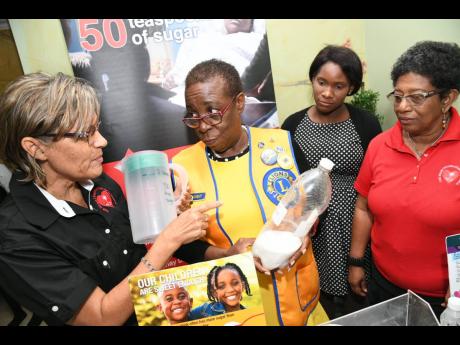 Rudolph Brown/Photographer
From left: Debbie Chen, executive director of the Heart Foundation of Jamaica, in discussion with from Julette Parkes-Livermore, president of Lions Club of Kingston, and members Sandrice White and Kay Cooke about the debate on the consumption of sugary drinks and the call for lifestyle changes to reduce obesity in the island at the Lions Club lunch meeting at the Courtleigh Hotel in New Kingston yesterday.

The Heart Foundation of Jamaica (HFJ) says that despite opposition, it will not relent in its campaign for the Government to institute a tax on sugary drinks in a bid to encourage healthier manufacturing and consumption habits to reduce the prevalence and impact of non-communicable diseases.

“The call for the tax on sugary drinks initially came from the from the World Health Organization (WHO), the Pan American Health Organization, the Caribbean Community (CARICOM) heads of government, CARICOM health ministers, and ministries of health globally. This is not a Debbie Chen-Heart Foundation episode,” HFJ Executive Director Deborah Chen said at a Lions Club of Kingston meeting yesterday .

“Our mandate is to protect the heart health of this nation. It would be remiss of us to hide behind desks and be afraid to step out to get change. Change is never easy, and as advocate, you are in the firing line, but we are not daunted. We know it is the right thing to do. We need a tax on sugary beverages,” Chen insisted.

She pointed to a “worrying increase” in the levels of childhood obesity. She said that a 2010 Global School Health Survey indicated that six per cent of a 1,623 sample of Jamaican students between 13 and 15 years old were obese. In 2017, the figure had increased to 10.1 per cent, with 1,667 students surveyed.

Adding that sugary drinks take a toll mostly on lower-income citizens, Chen pointed to a Gleaner article written by Professor Fitzroy Henry, former chairman of the National Food Industry Task Force, in February 2018, which said that 65 per cent of persons locally were unwilling to change consumption habits. No sample size was indicated for that study.

“Studies in Jamaica have shown that regardless of the level of education, many people are not willing, ready, or able to change their high sugar intake. Sugary drinks hurt lower-income people disproportionately because in many countries, lower-income households consume more sugary products, so they have more obesity, diabetes, and other diet-related illnesses. With a tax, because the lower-income household is more responsive to prices, they will reduce their consumption and drink water or drinks with less sugar that are cheaper,” Chen argued.

She continued: “We are not here to run companies out of business, but taxes have been shown to be most effective to reduce sugary drink consumption.”

Chen also called for a restriction on the marketing of unhealthy products to children and laws to make it mandatory for companies to place front-of-package labels on products.

“We recommend the Chilean model. In Chile, when you take up a package, very clearly it says, for example, high salt, high fat, or high sugar. Without having to figure out how to read labels, which are not user friendly, the public will be able to make heart-healthy choices,” the HFJ executive director said.

Lions Club of Kingston past president Major Desmon Brown told The Gleaner that he was concerned that large global companies were spending money to misinform consumers and create doubt.

“What we need is people, especially the media, to research and present facts. It is only when people get high blood pressure and diabetes tablets that they start to think about it,” he said.