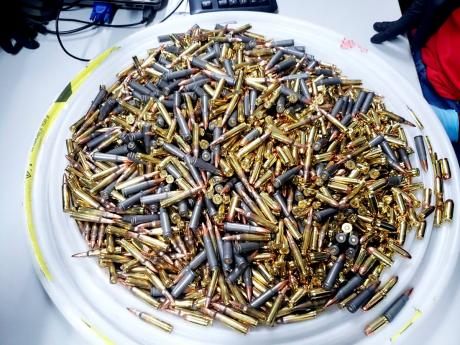 Contributed
More than 1,500 rounds of ammunition were seized at the Freeport wharf yesterday.

The Area One Contraband Enforcement Team, along with the Customs Department and the Freeport police, seized six illegal firearms and more than 1,500 assorted rounds of ammunition during an operation carried out at the Freeport wharf in Montego Bay, St James, on Thursday afternoon.

Reports by the police are that shortly after 3 p.m., customs officers were carrying out routine checks of barrels in the wharf warehouse when they detected irregularities. The barrel was stripped, searched, and found to contain the illegal firearms and ammunition.

The police say they seized six 9mm semi-automatic pistols, along with 1,500 assorted rounds of ammunition. Some of the ammo is used in M16 and AK-47 assault rifles.

A senior police officer in St James said that the seizure is part of the ongoing security crackdown geared at ridding the parish of illegal firearms.

“This massive firearm and ammunition find is the second of this magnitude since the state of public emergency has been declared in St James on April 30,” the senior officer, who requested anonymity, told The Gleaner.

“The police are hell-bent on getting rid of the guns, and I must commend their hard work leading up to this latest seizure.”

On May 1, the police carried out an operation at the Freeport wharf and seized more than 1,800 assorted rounds of ammunition.

One man was taken into custody in connection with that seizure.