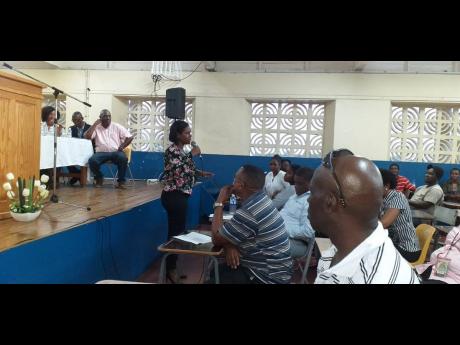 Photo by Gareth Davis Sr
Kedesha Campbell, director of the Constituency Development Fund in the Office of the Prime Minister, addressing East Portland residents and stakeholders at a meeting on Thursday.

Eastern Portland residents, business operators and other stakeholders listed poor roads, unemployment and lack of water as the main priorities they want Member of Parliament (MP) Ann-Marie Vaz to tackle at the Constituency Development Fund (CDF) consultation meeting since she was elected in April.

The meeting, which was held on Thursday at the Titchfield High School, was aimed at sensitising the constituents to the $20-million CDF allocation to the constituency.

Director of the CDF, Kedesha Campbell, emphasised that the CDF was mainly geared towards community development and gave an outline of how the money is spent and the importance of having on board the varied implementing agencies.

“We have to build communities and change lives. Before the MP can spend that $20 million, there are some mandatory categories,” she told the audience.

“Since I am the director, I have put it mandatory that no MP can spend under $5 million for education. None. So if you have the CDF, at least I am sure that $5 million is invested in our youths,” Campbell added.

“So since Portland was ‘backa’ (behind) God, more money will be spent here, so persons can be educated. More persons can go to university, more persons become marketable, more children get the opportunity to go forward,” the CDF director said.

The CDF director noted that the $20 million is sent to the various implementing agencies. She said that of that amount, $12.5 million is towards mandatory spending, leaving only $7.5 million for MPs to fund projects.

Campbell said that while she understands the concern for roads and other infrastructure, the CDF does not provide enough money for significant road repairs and that MPs had to be creative to make the best use of the funds in improving communities.

She said that she would prefer to see the construction of a state-of-the-art resource centre, a playing field, and a sports complex as a reflection of community development rather than personal benefits for individuals.

Vaz said while she is new to being a parliamentarian, she is eager to learn.

“I am taking my time to learn it because I want to get it right. The people of this constituency have suffered long enough for lack of water, lack of road, lack of opportunity, lack of hope, lack of being able to dream. I have to give account for every cent and I want to be held accountable,” she said.

The National Works Agency, the Portland Municipal Corporation, the National Water Commission, and the Social Development Commission were commended for their roles in project implementation, which, according to Campbell, allows for transparency and accountability.