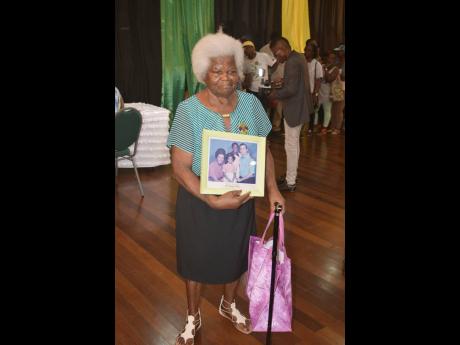 Christopher Thomas Photo
Melita Daley, a 93-year-old resident of Flankers, St James, with a portrait of a younger Edward Seaga and his family yesterday while paying tribute to the former prime minister at the Montego Bay Cultural Centre. 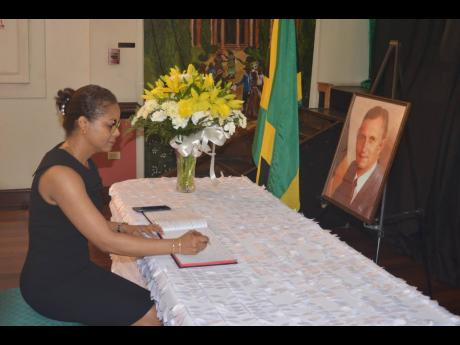 Scores of residents from western Jamaica, alongside members of the local political directorate and other prominent stakeholders, turned out at the Montego Bay Cultural Centre in St James yesterday to pay their respects to former Prime Minister Edward Seaga, who died in Miami on May 28.

Long before the scheduled ceremony began at 9 a.m., persons from as far as Westmoreland gathered in and around Sam Sharpe Square, where the cultural centre is located, to file past the closed coffin bearing the remains of the nation’s fifth prime minister, who died at age 89.

Despite the number of persons who showed up, it was an orderly affair under the watchful eyes of members of the Jamaica Defence Force, who formed a guard of honour. A condolence book was also available for signing.

Melita Daley, a 93-year-old resident of Flankers, St James, openly displayed her affection for Seaga by showing up at the viewing with a photograph of the former Jamaica Labour Party leader in his younger days, which she held like a treasured possession.

“I have this picture for more than 50 years. I got the picture and I keep it in my house. I love him because he came here and build Jamaica,” said Daley. “May God rest his soul in peace. I thank him for what he has done for Jamaica.”

Unlike some persons in Kingston, who openly expressed displeasure that they were not allowed to view the body, there were no such issues in Montego Bay as the attendees made it clear that they respected the decision of Seaga’s family for the closed-casket arrangement.

“I respect what the family has said. Whatever the family said, that’s what goes,” said Judith Daley, a resident of Savanna-la-Mar, Westmoreland. “We love him very much. That man was for the poor people.”

Montego Bay Mayor Homer Davis, who was the first person to sign the condolence book, reflected on Seaga’s contribution to infrastructural development in the western city when he spoke to The Gleaner.

“The name of Edward Seaga is synonymous with Montego Bay as the soon-to-be-built Closed Harbour Beach was his conceptualisation of reclaiming Montego Bay’s waterfront. The Montego Bay Free Zone that we now boast about was his brainchild. It will be hard for anyone to surpass his achievements as it relates to infrastructure development in Montego Bay,” said Davis.