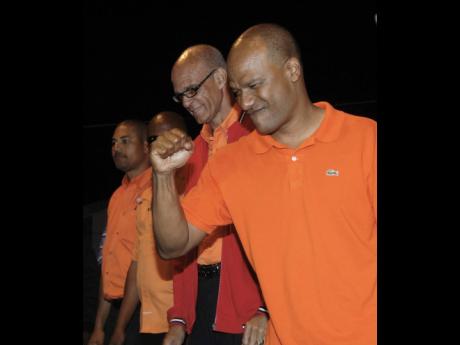 Dr Peter Phillips will have a fight on his hands to hold on to the reins of the People’s National Party (PNP) after Central Manchester Member of Parliament Peter Bunting ended months of speculation yesterday by confirming that he will mount a challenge for the leadership of the 81-year-old party.

“Dr Phillips has made an outstanding contribution to the party and the country in the various positions in which he has served over the past three decades.

“However, since becoming [PNP] president, he has not implemented a single transformational initiative within the party and is just not seen as the right person for this time,” Bunting argued in a statement announcing his candidacy.

“Therefore, I confirm that I am offering myself for president of the People’s National Party at the annual conference in September,” said the statement, a copy of which was obtained by The Sunday Gleaner.

Further, Bunting seemingly confirmed a report by The Sunday Gleaner that he recently turned down an offer to become the PNP’s campaign director. “I share the belief that new leadership is the best course for the party. In the circumstances, therefore, I could not in sincerity accept any position recently offered,” the statement said, without providing details.

Bunting, an investment banker and former party general secretary, said that in the coming weeks, he will be engaging various stakeholders within the party and the wider society to discuss “the strategic direction in which I would lead the political movement that is the PNP, to hear their concerns and suggestions and finalise a contemporary, relevant political platform grounded in the foundational principles of our movement”.

He painted a picture of Phillips asleep at the wheel, disclosing that after the party’s narrow defeat in the 2016 general election, an appraisal committee was established to determine the reasons for the loss.

The four main findings of the committee, according to the Central Manchester MP, were that the PNP was “arrogant and took the electorate for granted”; a breakdown of trust within the leadership ranks in the run-up to the campaign; the party’s message was incoherent and “did not communicate hope”; and that as a political organisation, its machinery was not “election ready”.

“Our performance in East Portland confirmed that there has been no demonstrable improvement to the areas recognised as deficient and contributing to our electoral defeat in the 2016 appraisal report,” the statement said.

“Any objective analysis, using either quantitative or qualitative approaches, will show that there has been further decline in the PNP’s electoral competitiveness since 2016,” it continued.

Arguing that the PNP has always been the “architect of change”, Bunting asserted that there is a “rising tide” within the PNP that is rejecting the status quo and insisting on real change.

“Right now, the PNP is very much a sedate manager for a set of givens. If the whole political system becomes incapable of renewal through challenge, and I put it that way deliberately, then you’re going to find that the system will begin to lose credibility, lose momentum, and young people will have less.”

Bunting charged, too, that there is a growing “acceptance/resignation” in the public domain and among various stakeholder groups, including party members and supporters, civil-society and private-sector leaders, “that the PNP, under Dr Peter Phillips’ leadership, cannot defeat the JLP in a general election”.

Bunting said his view is supported by polls done by the party, the media and private interests “which all show weakness or deterioration in Dr Phillips’ standing”.

The poll was done between February 15 and March 3 this year.

Bunting said that his “core support team” will shortly establish a campaign committee with supporting structures and will organise their activities under the theme ‘Rise United’ as a “signal of our determination to tackle the factionalism that has afflicted the party for a long time”.