Clarendon SOS | May Pen at risk from blind CCTV cameras 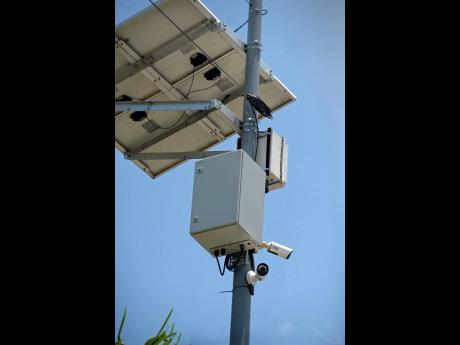 Lionel Rookwood
One of several CCTV cameras mounted in May Pen, Clarendon. Mayor Winston Maragh said that some of the cameras have been out of use since 2017.

Some of the 17 CCTV systems installed to watch over the volatile May Pen square in Clarendon are out of order, limiting one of the strategies implemented to catch criminals and deter lawlessness in the parish capital.

The cameras were set up across the square in 2017, but since then, the absence of a maintenance regimen has left some of the units as nothing more than ornaments, May Pen Mayor Winston Maragh revealed last Saturday.

Maragh is urging more business operators in the capital to invest in CCTVs and to subscribe to the struggling JamaicaEye surveillance initiative launched by the Government in 2018.

Earlier this year, it was reported that there were only 500 private partners in the JamaicaEye programme islandwide.

“There were 17 cameras in May Pen, but I have got to understand that about four or five of them are not working right now. So I would like the Ministry of National Security to send in technical teams to come and have those cameras repaired,” said Maragh, adding that there was need for technicians to monitor the cameras.

“The police might have to rethink their strategies. I don’t know how it is going to be done. We might need more cameras in the town and other areas. We also need the business people to get involved,” he told The Gleaner.

“Things are happening, and the guys (criminals) are observing. They know where there is no camera. They see where the others are pointing, and they move quickly. All of that will have to be looked at,” Maragh said.

Maragh, who chairs the Clarendon Municipal Corporation, which has oversight for public order in the parish capital, said he only learnt that some of the cameras were dysfunctional after the daring robbery of a supermarket by eight heavily armed attackers on May 26.

Three persons have been arrested in connection with that incident, but it was not immediately clear whether CCTV systems played a part in that breakthrough.

In the meantime, Maragh argued that only one policeman is tasked with overseeing the other cameras, which he described as critical to May Pen’s security infrastructure. He said that the workload required a team.

The Clarendon Municipal Corporation has no role in the maintenance of the cameras, visibly perched on street lights throughout the town, he said.

Head of the Clarendon Police Division, Superintendent Vendolyn Cameron Powell, when asked about the efficiency of the CCTV systems in May Pen, declined to comment.

On Friday, however, vendors and shoppers in May Pen openly questioned the effectiveness of the CCTV systems in thwarting or investigating a string of burgeoning crimes in the capital.

“The cameras in May Pen work just like the police dem; dem deh here, and at the same time, dem is not here. It doesn’t matter whether you have cameras up or not, the criminals dem don’t care,” said Shanay Ebanks, who works at a May Pen wholesale.

“Dem still going to carry out dem shooting same way ... . I don’t even know if di camera dem a work,” she added.

“How camera must make we feel safe in May Pen when the police, who the Government train up at Twickenham Park, come out here and are afraid themselves?” laughed one fruit vendor operating outside the May Pen Police Station. “If police weh have gun can’t make we feel safe, a camera going to do it?”

One taxi operator offered: “Trust me, you have gunmen watching you in May Pen more than you have camera watching you.”

Winsome Witter, head of the Clarendon Chamber of Commerce, said she became aware that some of the CCTV systems in May Pen were not functional during a tour for Police Week last year. She, however, could not speak to the current state.

In the meantime, she said, CCTV systems are welcomed by members of the business community in May Pen, who have openly expressed interest in acquiring cameras and becoming part of JamaicaEye.