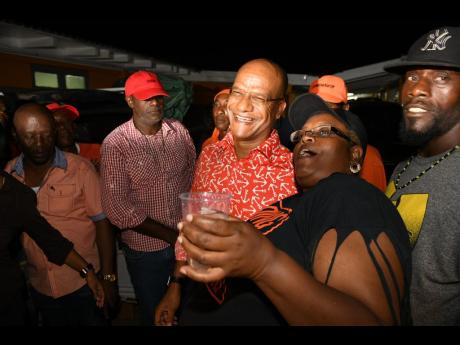 Damion Mitchell, Integration Editor At the stroke of 8 o'clock Sunday evening Manchester Central Member of Parliament Peter Bunting entered an auditorium at the May Day High School in his constituency to the sound of Chronixx's 'Here comes trouble'.

Hours earlier, he had officially declared that come September, he will be running for the post of president of the People's National Party (PNP) now held by Dr Peter Phillips.

It was the conference for the PNP's Knockpatrick division with which Bunting said the announcement of his leadership intention merely coincided.

"We can win!" @PeterBuntingMP says his challenge for the presidency of @JamaicaPNP will energise Comrades. pic.twitter.com/exyNtfGhGQ

When he took the microphone, Bunting sought to dismiss claims that his leadership ambition was for selfish reasons.

He said he had never faced an internal party election because he always offered himself at points when the party was in a "bad position." The former PNP general secretary said his leadership bid is to energise the base of the party.

"We can win!" Bunting shouted. He also said his leadership bid was not calculated.

"Not every decision you make is based on arithmetic. Some decisions are made because you are called to make that decision," he said.

"This was a decision that I felt called to make."

Bunting also said there was no hostility between himself and Phillips. In fact, he said he was insisting that the campaign to be launched next month is run with only love and respect.

Dayton Campbell - MP St Ann North West
We do not want the PNP to be 'Seagarised'. My future depends on this. I think Bunting offers the best balance in the PNP.

Donovan Mitchell - Mayor of Mandeville
We build with Bunting, we bank with Bunting and so we are not going to stop until we get him where he belongs.

Michael Stewart - MP, Manchester South
If the voice of the people is saying we need a change, then we have to listen them or else we're going to be left in the cold. If what is being observed here today is anything to go by, South Manchester will not be left behind.

Everton Fisher - Councillor, Balaclava division
I was giving up hope but tonight I feel energised. If Andrew Holness thinks that we going to let him off the hooks, the People's National Party is not going to roll over and die and we're make sure we do the right thing when the right time comes.