Wait over - Bunting says challenge to Phillips not premature; election too close to hold out further 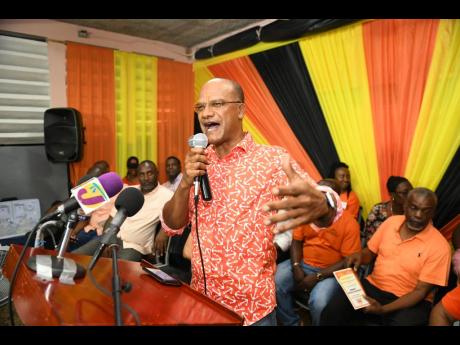 In his first address since making public his intention to challenge Dr Peter Phillips for the presidency of the People’s National Party (PNP), Peter Bunting has declared that he is ready to lead the party to victory.

Bunting, who said he was not driven by personal ambition, slammed critics who argued that his presidential bid has come at a wrong time.

“I have, up to today, never contested for any position I have had in the People’s National Party. So who want to say it is ambition driving this Comrade can talk whatever they want, but there is no evidence to support that,” Bunting told supporters at May Day High School last night at a divisional conference in Knockpatrick, Manchester.

The former PNP general secretary said there was an urgent need to rebuild the party’s organisational structure in order to put up credible resistance to the Andrew Holness-led Jamaica Labour Party (JLP).

He rejected notions that his decision to step forward was premature and that it could derail the PNP.

“That is why it is urgent for Comrades to believe that we can win.

“ ... Everybody is now saying, ‘But elections are about to be called.’ I don’t know in Opposition that we can call election, but I don’t see any logic why an election would be called [early]. I really don’t buy that at this time. But an election will probably be called next year, and that is why it is all the more urgent for us to get ourselves in shape,” Bunting said.

“This party is a democratic party. When you are in the PNP, the people have a right to decide [who they want] to lead them at all times.

“The role of the PNP right now is to win state power. The question is: Can the current state of the People’s National Party win state power?” Campbell asked yesterday at the conference.

The crowd responded: “No!”

It was then that Campbell charged that the delegates of the PNP should not allow the party to labour in Opposition as did the JLP under Edward Seaga.

“We do not want the People’s National Party to be ‘Seaga-rised’.

South East St Mary caretaker Dr Shane Alexis was on the platform with Bunting but did not endorse either candidate.

Bunting’s stated intentions have set tongues wagging among the delegates and the officer corps of the party, though many have said the move was expected.

Already, battle lines have been drawn in the party. There have been closed-door meetings and quiet endorsements in some quarters, while some remain on the fence.

However, Bunting was endorsed by all his councillors.

“This team is 150 per cent behind our leader. There is no doubt today as to my commitment to Peter Bunting. Today, the 9th day of June, I am pleading full support for my MP,” said Mandeville Mayor Donovan Mitchell yesterday.

“We build with Bunting. We bank with Bunting, and we not stopping until we get Bunting where he belongs,” he added.

“I believe the party must put itself in the best position to win. Under the leadership of Peter Bunting, a proven winner, the PNP will do just that,” Golding said.

But he also noted that Phillips, whom he said has made a “tremendous contribution to our party and the country”, was also his friend.

But there ended the goodwill towards Phillips – at least politically.

“However, all indications are that Dr Phillips cannot lead our party to victory in a general election,” Golding stated.

Fourteen members of parliament out of the 29 who currently sit on the opposition benches in Parliament attended yesterday’s extraordinary meeting called by Phillips at the Versalles Hotel in Clarendon.

However, The Gleaner understands that several of that number back Bunting. Hanna has openly put her name in Phillips’ column.

Bunting’s challenge comes as the 81-year-old PNP has found itself in bad shape, losing all competitive by-elections over the past two years, including its bedrock East Portland seat to the JLP’s Ann-Marie Vaz, a political neophyte.

The presidential election is scheduled to take place in September. Gleaner sources indicate that Bunting would disagree with an earlier date because it would limit the time he had to solicit support from delegates.