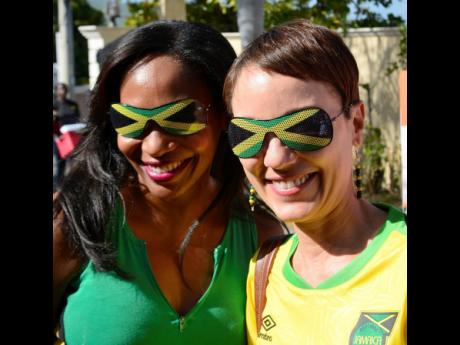 Ian Allen
Kamina Johnson-Smith (right), minister of foreign affairs, and Shorna-Kay Richards, director of the Bilaterial Relations Department, Ministry of Foreign Affairs, had on matching sunglasses when they turned up at the Brazilian ambassador’s residence to watch the Reggae Girlz make their debut in World Cup football against Brazil. The Girlz were defeated 3-0.

Anticipation was high among diplomats and government officials alike as they gathered at the Brazilian Embassy in St Andrew yesterday for a ‘Bramaican’-style breakfast and to watch the FIFA Women’s World Cup match between Jamaica and Brazil.

With eyes fixed on a large screen erected on the lawns of the embassy, supporters donned in black, green, yellow and blue cheered on their respective teams.

Members of the audience roared as Brazil’s Cristiane Rozeira scored the first goal after 15 minutes, much to the disappointment of the Reggae Girlz supporters present. Rozeira completed her hat-trick with goals in the 50th and 64th minutes.

In the midst of the excitement, spectators grabbed their breakfast from the buffet, which included Brazil-produced corned beef, plantains, breadfruit, dumplings stuffed with corned beef, locally grown fruits, and pastries.

The breakfast, however, did not end when the match did as persons gathered to see chefs face off in a corned beef competition.