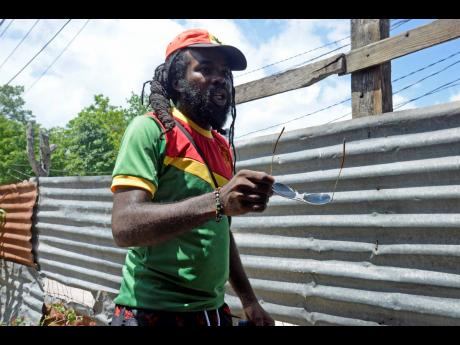 Lionel Rookwood/Photographer
Kayon Morris relates to The Gleaner how gunmen turned his life upside down and the lasting effects of the fateful night.

One fateful Saturday night, five years ago, Kayon Morris was walking with a cousin and an elder in his Clarendon community of Oliver Gardens, when his life was turned upside down.

As he made his way home from work, Morris said he heard the words “Police! Don’t move!”

“The guys had kerchiefs around their faces,” he told The Gleaner.

Upon hearing the order, his companions fled and he followed suit. The men then turned their high-powered weapons on them.

“They opened fire and I was hit three times and I didn’t realise because I was running. I fell a few times because I was getting weak. I got shot in the back, in the right thigh, and one went through my scrotum sac. I made my escape and called a brethren to take me to hospital. It was at hospital, I realised I was shot three times,” recalled Morris, who insists that he doesn’t involve himself “in crap”.

Clarendon has become a hotbed for criminality over many years, and based on testimonies from residents, Effortville, or Farm, where Oliver Gardens is located, is one of the most dangerous communities in the parish.

The 39-year-old Morris said since the incident, the only thing that has kept him in check is a positive mindset.

“I have a challenge dealing with the whole thing, but I smile every day all the same, whether things are tough or soft,” he said.

He told The Gleaner that he is still having a difficult time dealing with pain from the ordeal, as well as coping with medical expenses in the aftermath.

And his life has changed significantly, too, with him being unable to perform tasks he usually did effortlessly.

“Before now, I could get certain things myself. I can’t climb trees again, so if I want ackee, breadfruit and dem thing deh, I have to ask somebody to pick them,” adding that he sometimes isolates himself as he reflects on his changed circumstances.

Adamant that he isn’t looking for handouts, Morris said he would be grateful if a good Samaritan assisted him with raw materials so he could resume production of jewellery craft items for sale.

“Monetarily, it is not easy, because every trip to Kingston and every test at the doctor costs. I am a one-man soldier who doesn’t really rely on people, but since the incident, it has made me weaker in the body. The good thing is that my mind is strong,” he told The Gleaner.

”If I could get some materials or goods to sell, I will be able to keep on feeding myself. I make bead chains and jewellery with coconut shells and so on, and I draw well, too.”

Morris expressed thanks to the Clarendon-based James and Friends Foundation for moral and other support.

Reflecting on crime across the parish, Morris said sometimes he considers running to the hills to escape the mayhem on the plains.

He pointed to a lack of respect among youth in the parish as a major contributor to the ongoing violence.

“I just hope for the best. I know how to control anger, but sometimes when I realise what happened and knowing I didn’t deserve it, it has a big impact on the mind,” he said.

Morris continued: “The youths need to know themselves. They have no respect for their parents or themselves. They lack self-esteem, and that is why they can fire a gun at anyone they feel like. The man dem weh gi di youth dem gun must give them jobs instead of guns.”