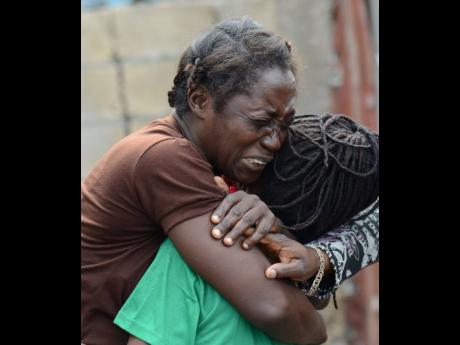 File
Arlene Campbell weeps while holding a grandchild at the scene where her daughter, Karen Rainford, was beheaded by by her babyfather in Common, off Mountain View Avenue, in 2014. 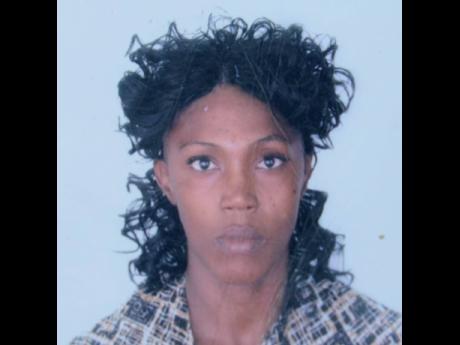 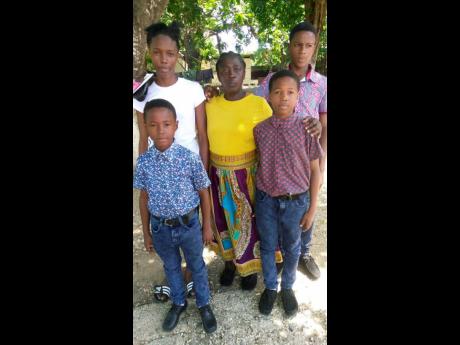 Contributed
Grandmother Arlene Campbell stands with children (from left) Zahere, Ijayne, Jowane and Shamli Barrett. The children’s mother was chopped to death and her head severed in 2014 by their father, who is reportedly still on the run.
1
2
3

Five years after Karen Rainford was beheaded by the father of four of her six children in Mountain View, St Andrew, her elderly mother and children are desperately seeking a safer home after jumping out of the frying pan and into the fire.

The four children and their grandmother, Arlene Campbell, have been sharing a small two-bedroom board and concrete hovel in the crime-ridden community of Effortville, otherwise called ‘Farm’, in Clarendon since their mother’s death.

At least 10 persons have reportedly been killed in Effortville in recent months, as gunmen put Clarendon under siege.

Campbell, a janitor, says her humble earnings of $9,400 fortnightly support her grandchildren, whose school fees are paid each year by business operators in May Pen and its environs.

But the living space, over the years, has become even more cramped as two of the children have entered adolescence. Rainford’s two eldest children are reportedly living overseas with other relatives.

“It is hard, really hard and stressful, but me have to press on with them, you know,” said a shy Campbell, recalling the transition after losing her daughter and struggling with the children gripped by the pangs of trauma following the February 16, 2014, incident.

“It rough, but me still have to a fight it, bad. We will get little help from people here and we get a little help from the CDA (now the Child Protection and Family Services Agency), … but the day-to-day [maintenance] is very stressful and hard, and it’s me alone,” said the struggling grandmother.

“Me just buy what the money can buy. Anything the money can’t buy, it just can’t reach. But me spend most of the money on food,” she continued, noting that getting assistance to build even another room on the land she now occupies would do “a lot” for the family, adding that the leaking dwelling gets even more clustered whenever relatives visit.

“It would make all of us a lot more comfortable. Because she a get big as a girl, and the three little boys dem want dem own little space,” she said, looking at Rainford’s eldest daughter, Ijayne Barrett.

As her grandmother spoke, Ijayne’s eyes welled with tears. Mother’s Day, she said, like the date of her mother’s birth and death, has become a sorrowful occasion.

She no longer has her mother or her father, as he has been on the run from police since the incident.

“It is grieving sometimes, when I remember all Mother’s Day gone, it really grieving. Normally for Mother’s Day, she would carry we out somewhere and have fun, but we don’t have that again,” said Ijayne, adding that she and her brothers have spent Mother’s Days over the last five years clearing bush from their mom’s grave.

“It really affects us, because she would be here with us, taking care of us,” she said, looking on in dismay, as her siblings gathered.

Ijayne wants to become a bank manager, but says she loses out on her studies because she has no access to a computer.

Her brothers – Jowayne, 14; Shamali, 11; and Zahere, eight, who is reportedly doing extraordinarily well in school – hope to become soldiers.

In the meantime, the family continues to mend after Rainford’s death in a community where crime is hard to forget as rival gangs trade bullets daily and render areas no-go zones for some residents.