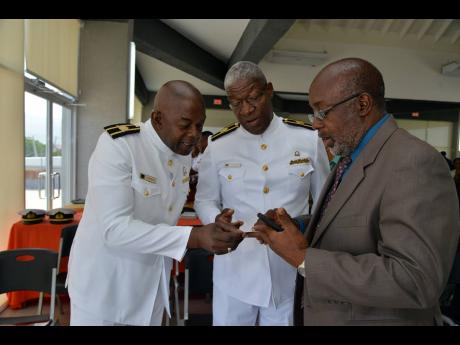 The assertion came yesterday during his address at the Caribbean Maritime University conference on countering proliferation challenges in the Caribbean.

Ellington, the director of the Centre for Security, Counter Terrorism and Non-Proliferation at the CMU, which hosted the conference in collaboration with the Washington-based James Martin Center for Nonproliferation Studies, said if the challenges in dealing with small-arms trafficking are not sufficiently addressed, an avenue could be created for the trafficking of WMDs.

“[Look at] the ruthlessness of the violence that we experience in Jamaica,” Ellington said when asked to shed more light on this observation. “This morning (yesterday) on the news we heard they invaded a house in Kingston, killing three people, including a 16-year-old. We have had situations where criminals invade homes and killing everyone, including babies. That type of ruthlessness, many of these criminals do it for money.

“It can be transferred to the execution of terrorist motives. ... The truth of the matter is if you are observing criminals operating over an extended period of time, then at some time, just the way they switch from one kind of criminal enterprise to the next, if terrorists are taking risks, it presents opportunity for earning. They can switch to it as well,” said Ellington, who retired from the top job in the Jamaica Constabulary Force in 2014 after 34 years as a member.

Ellington said that in many respects, Jamaica represents the nature, pattern, and challenges of crime in Caribbean states.

In considering the issues relating to proliferation, the former top cop says that attention should be placed on access to guns, interest in trafficking, and the motives of the traffickers.

“There are those sets of challenges which are exacerbated by proliferation of small arms and light weapons, and God forbid that they should acquire weapons of mass destruction! The proliferators that are involved in trafficking guns through the Caribbean to end-user countries like Jamaica, it doesn’t take much for the access to WMDs to be realised ... . It doesn’t take much for their interest to shift from small arms and micro weapons to WMDs, and certainly, it doesn’t’t take much for a country like Jamaica, with over 300 armed criminal gangs who are in crime for business, to have a shift with a little inducement in the form of money to start carrying out terrorist acts or near-terrorist acts in our space,” the veteran crime fighter said.

Ellington presented data from Amnesty International, which lists Jamaica high on the list of the world’s most murderous countries.

“Jamaica continues to feature in the top three and top five most dangerous countries on the Earth,” Ellington asserted after the list presented showed Jamaica at number three behind Venezuela and El Salvador.

The former commissioner recalled that 2012-2013 police statistics show that somewhere in the region of 85 per cent of the murders in Jamaica were carried out with the use of guns.

Ellington said, “The prevalence of gangs in Jamaica and other Caribbean countries presents high demand for trafficking in guns and bullets. In Jamaica, the police will tell you they recover from the streets, in any given year, 600-700 illegal firearms and countless amount of ammunition, yet there is never a shortage of guns and ammunition in the hands of criminals.”

He also pointed out that barefaced gangsters were posing with weapons on social media, daring the police to come for them.

This, Ellington said, could signal to international arms traffickers that Jamaica is a lucrative market for illegal arms.

“The main challenge to policymakers has to be, how do they destroy the business of proliferators?” Ellington said.