Portia: Leave me out of PNP presidential race - Former party head says she won’t pick a side in looming Bunting-Phillips battle 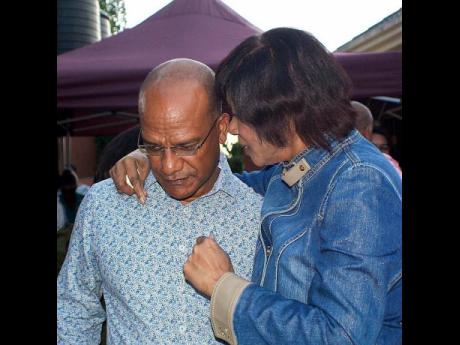 An endorsement from former People’s National Party (PNP) President Portia Simpson Miller could have been a fillip to the campaign of either current leader Dr Peter Phillips and challenger Peter Bunting ahead of a September internal election.

But as pundits watched to see if the former president would back her one-time general secretary, Bunting, over Phillips, who twice lost to her in attempts to take the top spot, Simpson Miller stepped out of the shadows yesterday to declare that she would be staying on the sidelines and out of the battle ring.

Photos surfaced online on the weekend showing Bunting and Simpson Miller in conversation at Richard Azan’s birthday party in Spaldings, Clarendon, sending tongues wagging over her allegiance in the high-stakes race.

However, Simpson Miller said the photos were not an indication that she had given her backing to one side or another.

“It has come to my attention that images of me are being circulated, giving the impression that I have taken sides in the upcoming PNP leadership race. I have not and will not take a side. I ask that my name and image are not used in the campaign,” the former PNP president said.

She, however, encouraged both men vying for the presidency to “campaign vigorously” and “be mindful that after the internal contest, they must continue their preparations for general elections”.

She advised the party’s supporters to “keep the campaign clean and respectful”, adding that her loyalty remained to the party and not any specific individual.

In the meantime, The Gleaner understands that Bunting will officially launch his campaign next month and that he is unlikely to back a Phillips proposal for an early delegates’ conference as it would limit his time to campaign.

On Tuesday, the officer corps of the PNP met at the party 89 Old Hope Road headquarters to discuss the challenge set in motion by Bunting, including the proposal for early elections. However, the Comrades had not come to a position on the latter.