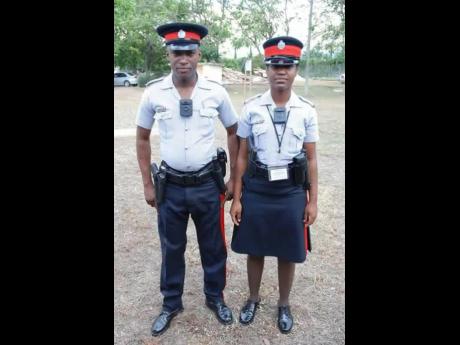 The Independent Commission of Investigations (INDECOM) yesterday reiterated its call for the wide-scale distribution of body cameras for police personnel, citing that none of the allegations it has probed have involved evidence from such devices.

INDECOM has also called for lock-up cells to be equipped with closed-circuit television (CCTV) systems.

Terrence Williams, INDECOM commissioner, is also demanding greater accountability for officers who use less-lethal weapons such as batons and pepper spray.

“If you can recall, a few years ago, an inmate was killed in lock-up. Thanks to CCTV footage, that matter was able to be resolved and put before the court,” Williams said.

The commissioner lamented that the CCTV cameras at the Falmouth police lock-up, which had been positioned to be a model station, are no longer working.

According to INDECOM, the confined isolation of lock-ups made them vulnerable to the misuse of force by state agents.

“The presence of the CCTV camera gives you independent, real evidence as to what took place, and rather than more and more, we are seeing less and less, and this needs to be maintained and rolled out at more stations. Indeed, I would say in guardrooms, front rooms of the station, and cells ought to have CCTV cameras,” he added.

Carla Gullotta, executive director of prisoner-rights lobby Stand Up for Jamaica, backed the call for a roll-out of CCTV cameras at police stations, suggesting that it would deter abuse.

“It would prevent people from doing something wrong. In the cells, however, that may infringe on the rights to privacy,” she said.

She told The Gleaner that privacy considerations would nix the idea of installing cameras in prison cells.

“Cells don’t have bathrooms and they (inmates) carry boxes and newspapers and do their thing and often keep it there until the next day. Maybe if it was a modern facility, [you could].”

Williams said: “We continue to encourage the use of body-worn cameras, and we also want the force to consider outfitting with a decontamination spray, which could be used as a remedy after pepper spray has been administered. We continue to encourage it, and I trust that they will soon implement it in the force. As to ‘why not yet?’ is a question more suitable for the commissioner of police.”

Up to press time, neither Deputy Superintendent Dahlia Garrick, head of the constabulary’s communication arm, nor Deputy Commissioner of Police Selvin Hay, who is in charge of the Inspectorate, could be reached as both their cell phones rang repeatedly without answer.

Hay was appointed inspector general of the Jamaica Constabulary Force in February and forms part of the Inspectorate of Constabulary (IOC) team responsible for enforcing professional standards, among other duties. The IOC conducts audits and inspections at all police formations to ensure strict adherence to protocols.